Posted on November 5, 2011 by VocalsOnTop 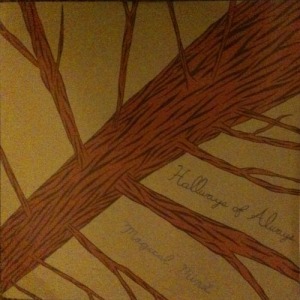 Hallways of Always is a duo of songwriters Jenny Hoyston and William Elliott Whitmore. William Elliott Whitmore has five excellent solo albums out while Hoyston has one solo album and a few with her band Erase Errata. They split duties on the record between songwriting and instrumentation along with several other musicians. Both songwriters presence is apparent throughout the record.

The record is available as a 6 track EP on CD or an 8 track LP. I read that less than 500 copies were pressed of the LP but it is always difficult to tell on these things. The bottom line is that it is a hard piece of music to seek out but is a nice collection if you can track it down.

“We Miss You” is dominated by Hoyston and “Black Iowa Dirt” is vintage Whitmore to the core. The latter song could have come off any of his solo albums but the rest of the album is a collaborative effort for the most part. Whitmore’s banjo makes an appearance on a few tracks but the album is based around solid acoustic strums. Several other instruments are worked in but it is largely an acoustic album.

The album is very solid but not essential to seek out for most listeners. There is one exception, “You’ve Already Gone” is a haunting duet that is a must hear for any fan of americana music. It is a detailing of a relationship that has fallen apart and is filled with sorrow as opposed to anger.