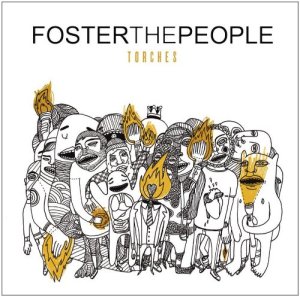 Every once in a while an impostor band like this pops up. A band that comes up with a great song or maybe just a hook that is incredibly intoxicating. Its like the beautiful girl at the bar; it actually is nowhere near as good as it looks. But you can’t resist; you have to know.

“Pumped Up Kicks” is the intoxicating number by Foster The People. I’m sure you’ve heard it over the last few months as it has continued to gain momentum on radio. I knew I wouldn’t like this album. I simply couldn’t hold off. I picked it up off a “discover price” type of rack at a store and headed home feeling guilty and ashamed.

A couple similar bands have turned out to be pretty good additions to my record collection; Phoenix and MGMT. Phoenix has Wolfgang Amadeus Phoenix and MGMT has Oracular Spectacular as records in my collection that are electronic like this but still very good. The bad news; Phoenix has a record called Alphabetical and MGMT has a record called Congratulations that both suck. Foster The People’s Torches falls in the latter category, don’t bother with it.

Torches is so poppy it will make your teeth hurt. It would fit in better at a college rave than anyone’s record collection. This is basically commercial jingles stretched to 3 minute songs and put on a record. Foster The People has an audience that probably loves them dearly. I am not willing to be in that crowd.