St. Joe’s own Dsoedean has had several shows with Omaha’s Millions Of Boys, the pair made their second appearance at the Cafe Acoustic in St. Joseph, MO on January 13. The local band would go on first showcasing a mixture of their two eps and some new material.

Dsoedean’s new songs show a lot of growth for the short period of time the band has been together. Zale Bledsoe’s lyrics are as personal as ever and the addition of Colby Walter on keyboards has changed the band’s sound. Marcus Words on bass and Bobby Floyd on drums keep the songs fresh as well. Floyd easily contributes more to the band’s sound than most drummers would. This is apparent on the new tracks “Continue To Move” and especially “Honest Air.”

Millions Of Boys would take the stage next with a short aggressive set of songs. Lead singer Sara Bertuldo would spend the evening trying to be heard over the bands sonic wall of sound. The barrage of punk would hardly let up throughout the set. Their song “Dead Girls” would be the highlight of the set and get the biggest ovation from the bar crowd.

Millions Of Boys would also have some new merch to sale at the show. They were performing songs from their new 10 inch record competing for your Love featuring 10 songs. 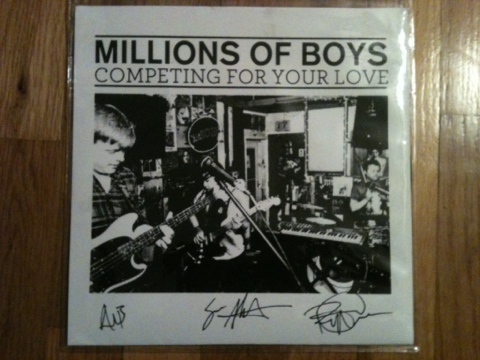 The show was a great showcase of the best band St. Joe and a great up and coming Omaha band. Hopefully the two bands will hook up again when Dsoedean’s new album is released.