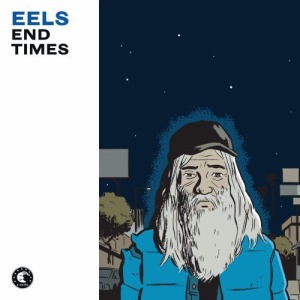 So just a few short months after the release of the brilliant Hombre Lobo, the Eels came right back and released End Times. Usually when two albums are released so close to eachother they have a very similar sound. This couldn’t be further from the truth in the case of the Eels Hombre Lobo and End Times.

While Hombre Lobo was filled with passion and desire, End Times is filled with heartbreak and depression. It is essentially a break-up album. It is pretty much just Eels kingpin Mark Oliver Everett (“E”) with little help throughout the disc. This doesn’t make it a bad album by any means, just a whole lot different.

Slow depressing albums have their place, look at Beck’s Sea Change, it is a brilliant album, likely the best Beck has ever released and it is very out of character for him. This album isn’t out of character for the Eels but you really need a certain mindset to listen to it.

The shining star of the album is the song “Paradise Blues,” one of the few rocking numbers on the disc. Several of the slow, brooding songs are great too, “In My Younger Days” has the wisdom of a songwriter twice E’s age and “Little Bird” has the most telling lyric on the whole record: The music slows to a near stop and E moans “Goddamn, I miss that girl.”

The album is a solid listen, it just isn’t an easy, accessible listen. End Times is a mood all of it’s own.