Posted on February 2, 2012 by VocalsOnTop

One of the most steady moving trains in the music business rolled through Lawrence, Kansas again on February 1st. The Old 97’s came to support their latest album The Grand Theater Volume 2. The album has been out for some time now but the band had played Kansas City last summer and was now hitting The Bottleneck in Lawrence as they did when touring to support Volume 1 at this time in 2011.

The 3 band bill started with the folk duo The O’s. The band was solid but it was hard not to think of all of the bastard children the popularity of Mumford & Sons and The Avett Brothers has spawned. With an acoustic guitar and banjo with kick drum mostly the band created quite a loud sound for just two members. Their set came to an end with their instantly catchy and addictive song “Everything’s Alright.” The most notable thing about the band however may be the fact that they had a giant lighted “O” as their backdrop. With a name that hard to remember it is good to have a visual aid.

Caitlin Rose would storm the stage next with her four backing band members for a set that she admitted wouldn’t be as loud as the O’s set even though their were more members now on stage. Her set was filled with the sweet sound of Nashville steel guitar and heartfelt songs about everything from rabbits to sleeping around. Rose’s voice really fits the mold for a female led country band, it was exactly what you would expect. 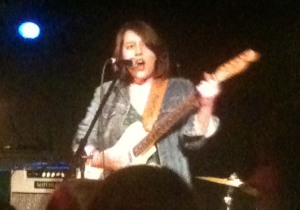 Caitlin Rose at the Bottleneck in Lawrence, KS on 2/1/12, wearing the jean jacket that wouldn't come off because the two guys right in front of her knew her songs a little too well.

The set was highlighted by “Shanghai Cigarette’s” and the pure country gold of “Own Side.” The song “Own Side” brought a couple fans to the front to sing along that Rose would try hard not to look at throughout the set. Her eyes were glued to the ceiling in the opposite direction of what appeared to be two biggest fans.

The Old 97’s then blasted out with a standard high-energy and highly entertaining set. The set would clock in at 90 minutes and 23 songs. It was actually a pretty standard Old 97’s set. All The regulars were played… “Murder” “West Tx. Teardrops” “Question” etc. A couple surprise songs were thrown in in “504” and “House That Used To Be” but it was a pretty standard setlist for the band.

They still put all their energy into the show and a “standard” Old 97’s show is still very impressive to see. Lawrence really represented well too I thought. Ryan Adams was in Kansas City and the Jayhawks were playing at home and it was the middle of the week. Despite all of this the Bottleneck was mostly full of an enthusiastic crowd.

The Old 97's knock out another great show at the Bottleneck in Lawrence, KS on 2/1/12

I’m continually amazed that the band ignores some of their strongest material however. They only played three songs off of the amazing albums Satellite Rides, Fight Songs and Blame It On Gravity, with the last one being tottally ignored by the band. I would love to see the band break out some of the gems from Satellite Rides the next time I see them.

It is interesting to see some of the Old 97’s songs develop into concert classics. Everybody who has seen their show knows how good of live songs “Barrier Reef” and “Four Leaf Clover” are but their are a few newer songs that have a similar effect. “Every Night Is Friday Night (Without You)” and “Won’t Be Home” have become stone cold classics to see live by the band. These songs are almost always the highlight of the show, Wednesday night in Lawrence was no exception.