The Record Bar is one of the chattiest venues in the Kansas City/Lawrence/Omaha/Lincoln area. It seems like the crowd at shows at The Record Bar are there to catch up rather than see a show. I don’t really understand this logic but it is a concert reality. The Craig Finn / Mount Moriah show at the Record Bar was likely the worst crowd as far as talking goes that I have ever witnessed.

Mount Moriah led off the show with a very good 40 minute set and would get the audiences best behavior of the night. The crowd was very attentive to the new band and listened to all of the songs they played without much interruption. Mount Moriah ranged from indie rock songs to country twang. 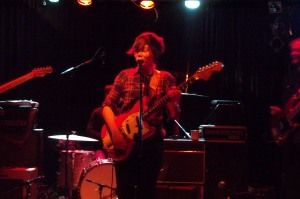 Mount Moriah is out with Craig Finn while he supports his first solo record Clear Heart, Full Eyes. They are an excellent fit for the sound of Finn’s solo album. It’s nice when tour mates music really compliments each other well. The smooth sound of Mount Moriah started the evening well with a sampling from their acclaimed self titled album and an EP The Letting Go.

The four piece band was led by lead singer Heather McEntire with a very straight forward approach to their songs. It is always nice to see a band that doesn’t try to blast their other bandmates out with their instruments. The mid-tempo set had a few rocking moments like on “Only Way Out.” Songs like “Lament” from their self-titled album sounded especially good live. The best from the band may be yet to come as one of the better songs from the evening was “The Letting Go” from their new EP.

Craig Finn would quickly take the stage after Mount Moriah departed. Fans of Craig Finn’s band The Hold Steady filled The Record Bar on this night. They would ultimately be disappointed if they came to hear their favorite Hold Steady song however as Finn would avoid the entire band’s discography.

Finn would play his entire brand new solo album Clear Heart, Full Eyes while mixing in several other new songs that aren’t available anywhere. He would come out with his backing band Some Guns, an accomplished Texas band that could match the steel guitar twang from Finn’s solo album.

As Finn promised a set of depressing songs he would start to play the opening song from both his album and the Saturday night show in Kansas City, “Apollo Bay.” He would slowly work his way through the 11 songs on the album while mixing in 6 other songs that I don’t believe are released anywhere.

After his comment of being in “another AL Central town” went over the crowd’s head, Finn would dip further into his solo album. The songs “Balcony” and “Jackson” sounded great live with Finn’s backing band and his rap-talk style of singing. After playing his band’s “theme song” “Some Guns” and the humorous “New Friend Jesus” he would take the stage all to himself as his supporting cast left the stage.

This is where the Record Bar’s horrible audience in attendance would become especially noticeable. Finn would perform four songs pretty much solo acoustic with many parts being stripped down to almost vocals only. The crowd would be horribly disrespectful to the guest of honor, Finn, by talking so much and so loudly that the soft acoustic songs could barely be heard. It was unclear whether these audience members wanted to hear Hold Steady songs or just didn’t give a shit about the show they paid to see. Either way the distraction had to effect Finn, bearing his soul on stage for the most intimate part of his set but he took it in stride and stuck to his motto “stay positive.”

Of the new, new songs the highlights were “Sara, I’m Surrounded” and “Dudes From St. Paul.” He would usually explain a little about most songs and even name the titles in most cases which really helps with these new unheard songs.

Some Guns returned to back up Finn again and they tore through many of the highlights from the solo album with “Honolulu Blues” “Rented Room” and “Terrified Eyes” before going off-stage after playing “Not Much Left of Us.”

The show would then appear to be set up for an encore from the band but there would be none. The stage lights when down with no house music for about 5 minutes while the very lackluster crowd gave a not very enthusiastic encore applause break. It was disappointing Finn didn’t return to the stage, even though he had already played an 80 minute set, but it was hard not to think of how disrespectful the crowd was during Finn’s solo set, making me wonder if that was the reason the set had wrapped up.