The Bombay Bicycle Club is a small club hidden in Clive, Iowa near Des Moines. Local H stopped in on their 2012 pre-album tour for Hallelujah! I’m A Bum due out later in 2012. The band’s path happened to cross with the tour of Hank Williams III’s guitarist Joe Buck’s own tour. Local H would be the headliner on the night but the Joe Buck Yourself would bring it’s share of fans to the venue as well.

The Bombay Bicycle Club (BBC) is a new venue for me to see a show in so before going into a review of the show I must try to paint a picture of the place. The BBC is a pretty cool place. It is a long bar with pool tables at the back and a small stage in the front with a bar and some tables and chairs in between. It has old bicycle frames turned into pool table lights and some cool neon signage and concert posters. The bathrooms are filled with well done graffiti and it has a nice adjacent smoking porch that is as big as the middle part of the bar itself.

The BCC would be a great place to meet friends and have a beer. All this being said the Bombay Bicycle Club is a shitty place to see a concert. Maybe for a local act playing in the corner with no one paying attention it would be alright but for a band that draws any kind of a crowd it is terrible. The small corner stage rises a lengthy six inches off the floor of the bar. This means that if you aren’t in the first two to three rows you don’t see anything. There is something that just seems wrong when the performer is not above the crowd.

Joe Buck Yourself took the stage with his small group of very devoted fans in front for the show. Joe Buck Yourself is actually just Joe Buck as a one-man band. He plays an acoustic guitar with a ton of distortion with a kick drum. The kick drum meant Buck was sitting down for his set which isn’t normally a big deal but in the crappy venue if you had more than one person in between you and the stage you would be listening to the show while looking at the back of the person in front of yous shirt.

Joe Buck Yourself performing live at the Bombay Bicycle Club in Clive, IA on 4/7/12.

I wasn’t familiar with Joe Buck Yourself’s music but I was with Hank III’s so I had a good idea what to expect. Buck delivered with Hank III style hellbilly type of music, very fast paced and aggressive but with many country sounding songs. The picture above is not a bad picture that makes Joe Buck look evil; It is exactly how Buck looked throughout the set. He constantly stared down members of the crowd like he was scouting out who’s ass he was going to kick. He wasn’t angry however, he was actually extremely happy with the reception he got. He even mixed in a Johnny Cash with all his songs about the devil, death and drugs. You would expect “Folsom Prison Blues” or “Cocaine Blues” with Joe Buck’s songs’ subject matter so it was surprising when he broke into the Cash classic “Get Rhythm.”

At 11:00 Local H would take the stage for a very enthustitic crowd, I couldn’t really tell how big the crowd was because I was in front and couldn’t see more than a couple feet behind me. Their ovation was big and the crowd hung on every line of their favorite Local H songs all evening.

The set wasn’t about playing the old Local H favorites however. They were mixed in the focus of the show was the upcoming album Hallelujah! I’m A Bum which Scott Lucas promised for a fall release. Two of the first three songs would be songs from the upcoming record that the band is playing songs from on this pre-album tour. The first song was a cover of “Terrible Love” a songs by The National. The next two songs that are off the upcoming album were “Cold Manor” and “Here Come Ol Laptop.”

Scott Lucas of Local H performing live at the Bombay Bicycle Club in Clive, IA on 4/7/12.

Scott Lucas would then bust into a “classic” Local H song with “Eddie Vedder” off the band’s bestselling album As Good As Dead. Lucas matched the era of this song with his new longer hair that he hasn’t sported since the time of that album’s release back in 1996. “Everyone Alive” would follow and as always it was a show highlight. The song is perfect for performing live. It is a hard rocking song with big sing along chorus as Lucas would sing “Is everyone alive?” the crowd would emphatically yell back at him “everyone, everyone.”

The venue would make it especially difficult to enjoy the show, even from the front. I don’t like being too close because much of the sound goes past you and vocals are hard to hear, in this place you had to choose to hear or see the show, not both. Because people in back couldn’t see many of them would just bull their way to the front knocking other people out of the way, this became very annoying. The inability to see also led to much more pushing forward and slam dancing as well which usually isn’t much fun when you are up front and watching the show and pretty much being attacked from behind.

The band would then dip back into the pot of new songs with the excellent sounding “Paddy Considine” and “Another February,” probably the best sounding songs of the new batch. Another highlight of every Local H show is “All The Kids Are Right,” Lucas always ends the song with pauses between the guitar licks at the end and always pushes so much space in-between the last two that the audience thinks the song is over. I know it’s coming every time but he always pushes it so much the audience begins to doubt the last guitar lick is coming, this time Lucas would even stop and take a drink between the last two. 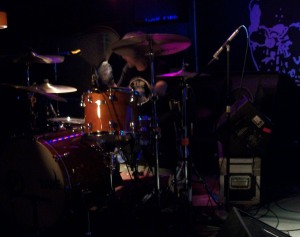 As always Brian St. Clair on drums for the band was awesome. Few drummers play harder than St. Clair. During a standard show by the band all you will see is a moving blob of hair form his head-banging. His drumming is especially noticable on the harder rocking songs like ” High-Fiving MF” and “California Songs.”

During two songs during the evening Lucas would mix in a cover within one of his songs. During “High-Fiving MF” he would shockingly sing a few lines from PJ Harvey’s dark and brooding “To Bring You My Love” and during “Bound For The Floor” he would not near as surprisingly mix in The Stooges “TV Eye.” There were no really surprising songs on the setlist but I did find it surprising that the band overlooked their entire 12 Angry Months album and also left one of their best songs “Hey Rita” on the shelf for the night.

The band would do a nice mixture of new music to their set as instrumentals to start their encore before breaking out the song that is the namesake for their upcoming record, “Look Who’s Walking On Four Legs Again” that Lucas would dedicate to Joe Buck. The encore also featured “California Songs” “Bound For The Floor” and the crash-dancing finale of “Back In The Day” As Lucas finished the set he would crowd surf back to the merchandise table to sell his own cds and shirts and give autographs. His crowd surfing put him right next to the ceiling and narrowly missing the stage lights hanging down as he surfed under them.

Local H setlist from the Bombay Bicycle Club in Clive, IA on 4/7/12: