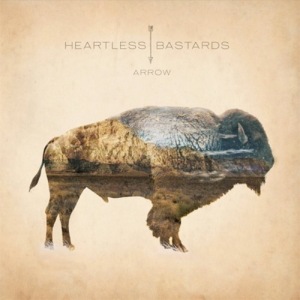 The core of the Heartless Bastards has always been Erika Wennerstrom. She is the not only the powerful voice that gives the Bastards their distinct sound but is the only member to appear on all four of the band’s albums. Their fourth album Arrow is a centerpiece to their catalog and feels like the record that Wennerstrom has been working to make since the formation of the band.

The music behind Wennerstrom’s voice has been evolving throughout the group’s catalog and this seems to be the strongest lineup and group of songs yet. From the slow building sound of the opening track “Marathon” on, Arrow just has a different feel to it. After increasing the tempo for “Parted Ways” the band tears into what is likely their best recorded song to date; “Got To Have Rock and Roll.” The song’s great driving stomp by new rhythm section. Jesse Ebaugh on bass and Dave Colvin on drums, powers the early-70’s Rolling Stones sounding song that demands to be listened to loud. Ebaugh’s bass is consistently stands out all through the album.

Erika Wennerstrom puts the focus back on herself for the next song, a slower song where she really lets her voice take center stage in “Only For You.” Arrow continues to balance solid rockers with slower songs through the records lengthy 10 tracks. The late album highlight is another slower song with another great vocal performance from the band’s lead singer in “Low Low Low.” In the end it is simply the Heartless Bastards best record and undoubtedly one the best albums on 2012.

Key Tracks: “Parted Ways” “Got To Have Rock and Roll” “Only For You” “Low Low Low”