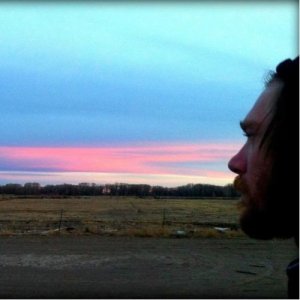 Ashley Raines is a bluesy, deep-voiced americana singer from Colorado. He isn’t well know and he isn’t new to the music scene. He has released several albums, somewhere around 8, and regularly tours playing small bars and venues.

His latest album One Trick Mule is a very solid piece of work that never strays from his bluesy, bass heavy sound. This makes the album hold together very well. It is also consistently dark  themed, with songs like ” I Blow My Brains Out Every Night” “All Hell Lets Loose” “Dead Horse” and “Crops Don’t Rise” it is hard to imagine this is an uplifting album, and it isn’t

It is a slower paced album that is credited to he and his backing band The New West Revue. With a few string arrangements and a lot of upright up bass the album’s sound is a hazy window to the downtrodden. Tracks like “The Decency To Die” and “I Blow My Brains Out Every Night” are very strong and stand out but the true highlights on the record are “It Is What It Is” and “Love Me Like You’re Told.”

“It Is What It Is” works as a microcosm of the entire record, a slow brooding track with touches of strings and guitar but kept together by a strong bass line. “Love Me Like You’re Told” has a very strong Warren Zevon sound to it while sounding demented and demanding all at the same time. One Trick Mule is a great glimpse into the underbelly of the americana scene.

Key Tracks: “It Is What It Is” “Love Me Like You’re Told” “I Blow My Brains Out Every Night”