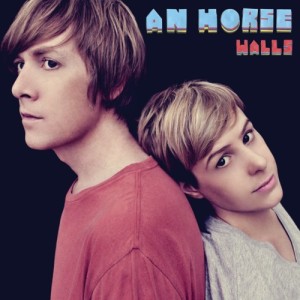 An Horse is a two piece band that is bare bones guitar, drums and vocals. Ironically enough, like many two piece bands (see Local H, White Stripes, etc.) they make a lot of noise.

With a female vocalist in Kate Cooper they have a distinct sound. The heavy-handed drumming of Damon Cox and the loud-quiet-loud guitar of Cooper keep the songs pace changing quickly much like The Pixies and Foo Fighters did long before them.

Walls is the band’s second record and is a respectable follow-up to 2009’s Rearrange Beds but ultimately falls a little short of the stellar first album. With catchy choruses of “Oh my God, I tick-tock for you” in “Trains and Tracks” and “Just sit tight it’ll be alright” in “Walls” the songs are very memorable and go down smoothly throughout the album.

The highlights on the album are “Dressed Sharply” and “Airport Death.” Both tracks feature good guitar licks and aggressive drum beats that are common to An Horse songs. The album has a couple slower moments as well like hearing Cooper’s fingers slide on the guitar strings on the gentle “Windows In The City.”

The vocals of Kate Cooper can be a little difficult to understand at times but are well worth deciphering. Some very cool stand-along lyrics are on the album like “Oh my God, I tick-tock for you” and “I’ll navigate the best I can, use this desk light as my friend.”