Bob Walkenhorst doesn’t draw the fans he used to. This applies to both quantity and exuberance. His crowd is much older now and his audience reflects that. The decent sized crowd in Maryville, MO on 8/16/12 to see Walkenhorst and Jeff Porter were mostly older and many had their children with them. I’m sure many trying to convince their kids how “cool” Walkenhorst was in his 80s/90s band The Rainmakers. He used to jump around a lot and were all colors of the rainbow even donning a top hat before Slash made it cool. Now Walkenhorst took the stage in grey slacks and a white button up shirt. The most colorful part of his wardrobe these days is his grey hair.

His writing/performing partner Jeff Porter is much the same. Porter now lets his hair grow long and lets the silver lochs shine in the sun as well. Their hair that showed their age so well was highlighted by the fact that the outdoor show had a stiff breeze to keep the hair moving.

The show shut down the main street of Maryville and was right in front of the courthouse. It made for a very cool backdrop for a show but still seemed unnecessary for the size of the show. Maryville is notorious for being a little too willing to shut down the streets of the square so it came as no surprise. 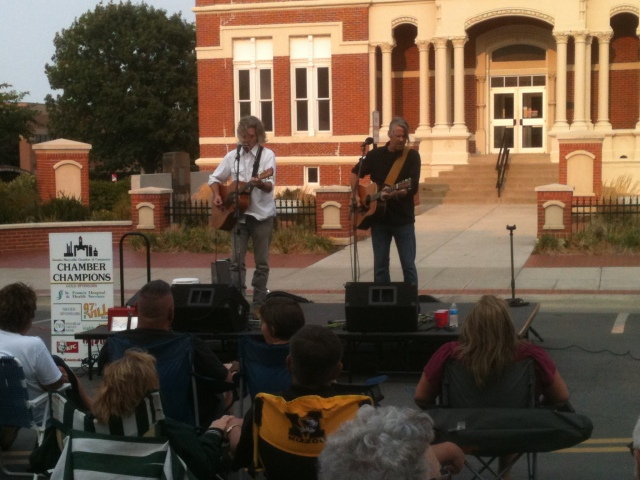 Bob Walkenhorst and Jeff Porter perform live in the street of Maryville, MO in front of the courthouse on 8/16/12.

Walkenhorst and Porter took the small stage setup right in middle of the street in front of many old friends and fans and delivered a slightly surprising set. The hour and 45 minute set included song from The Rainmakers catalog, both singers solo albums and the one album they recorded together. The surprising part was the lack of Rainmakers songs that usually fill the duos songlist. Surprisingly absent from the setlist were songs like “Let My People Go-Go” “Hoo Dee Hoo” and “Information.”

The 25 songs delivered on the night by the two would fit the family environment very well. It would be a mix of a couple covers and several slower songs and it would never get too rowdy. Possibly the Rainmakers most known song “Downstream” was performed right away but it would be one of only a few well known songs originally by the band. Porter, who is now a member of The Rainmakers, would help Walkenhorst bust out 6 songs from the band’s latest album 25 On. It was nice to see songs like “Half A Horse A Peice” “Kansas City Times” and “Go Down Swingin” get performed off of that album.

Porter really compliments Walkenhorst well. While Walkenhorst excells at hitting the upbeat rockers, like the classic “Downstream”, Porter seems to hit the soft notes better. Porter’s songs “She Still Waits” and “Savannah” off of his solo album 15 Miles hit a heart string that Walkenhorst can’t seem to get to as well. Porter’s “Little Bit Of White Trash” got one of the best responses of the night as it profiles people that everyone seems to have in their life.

Walkenhorst always carries the load for the duo as far a singing goes. His extensive catalog of songs makes it appropriate for him to do so. One of the highlights of the night was the seldom performed non-album track “The Almanac Lied.” Also very good were hearing the inside jokes in “Jan Vermeer” and Bob’s ode to country music in “Broken Radio.”

Really the show was stolen by Porter however, singing only about 6 of the 25 songs he enduced great responses from the crowd and ultimately showed his songwriting is on par with Walkenhorst.