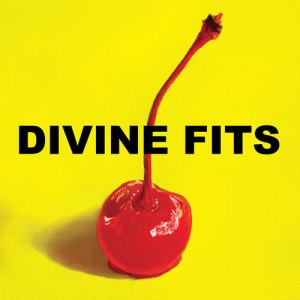 The term supergroup gets thrown around like it is a bad thing. It’s not, some projects don’t turn out well but the bottom line is that it is a group of good musicians that usually leads to good music. While you can undoubtedly hear Spoon, Wolf Parade and New Bomb Turks in the music on A Thing Called Divine Fits it is an album all to its own.

The balance of different singers and sounds is refreshing to the album. It rolls through its 42 minute running time smoothly and never even hints at getting boring. Whether it is a solid drum beat, good keyboards or a nice little tasty guitar lick the album is as fresh as anything you will hear. It is versatile enough to survive multiple listens as well. It is a record filled with great, simple pop tunes that flirt with perfection.

Dan Boeckner edges out Britt Daniel by singing 6 songs to Daniels 5 but both contribute great tunes to the album. Boeckner’s jewels are “My Love Is Real” and “Civilian Stripes” while Daniel shines on “Would That Not Be Nice” and “Flaggin A Ride.” The true masterpiece of the record belongs to Daniel however. The song “Like Ice Cream” may be one of the most perfect little pop tunes you will ever hear. With it’s catchy little guitar lick and divine simplicity it is likely one of the best songs of the year at this point.

Don’t miss out on this record, it is lightning in a bottle.

Key Tracks: “Like Ice Cream” “Civilian Stripes” “My Love Is Real” “Would That Not Be Nice”