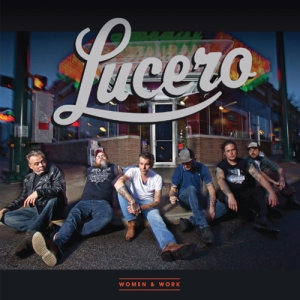 Lucero is one of many solid Texas bands with a string of records already available. So at this point the band knows their strengths and have found their identity so they can put out solid records. Women & Work is very good album that rolls pretty smooth from front to end.

Their raspy smoke filled vocals make their sound very distinct. Their music actually has a very wide range of influences and sounds. On Women & Work you can clearly hear influences from classic rock to blues and country all the way to punk. The band rocks out Bruce Springsteen and the E Street Shuffle style through much of the record. The seem to capture that spontaneous, passionate sound revolving around smooth moving songs featuring guitar all the way to horn sections. The record’s wide range of sounds never hurts it thought, possibly because of the distinct vocals holding the whole record together.

The can jam in a radio friendly style on songs like “On My Way Downtown” and “Juniper” but still have the soft touch to pull off songs like “When I Was Young.” “On My Way Downtown” it super catchy and in a world with better musical taste would likely be a big radio hit. The good time-feeling song is not alone on the record either, other tracks like “Women & Work” deliver the same punch.

The very end of the record drops off a little, mainly because of the overly slow ballad “Go Easy” that ends the album. While it isn’t a bad song it seems to wander and get lost a bid and wander a bit too long. It is a minor complaint on a good record however.

Key Tracks: “On My Way Downtown” “Juniper” “When I Was Young”