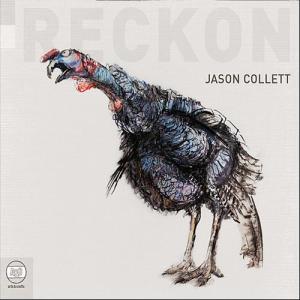 Jason Collett is flat out one of the most underrated songwriters around. On his fifth album Reckon he focuses on songwriting by turning down the volume and displaying his music at its most vulnerable. Fittingly the album has themes of broken dreams, loss and desperation.

The gentle plucking of acoustic guitar strings work at a catalyst for Collett throughout the record, showing he needs nothing more to tell his stories. The slow acoustic numbers make the few faster more rocking numbers stand out even more. “I Wanna Rob A Bank” is the highlight of the album, even though it isn’t a fast song it sticks out among the landscape of subtle songs surrounding it. The song still retains the album’s dark theme with the reasoning of “I wanna rob a bank… I just fill my tank…”

The record is likely best summed up by the down and out feeling portrayed by the song “Where Things Go Wrong” with the message “You belong where things go wrong.” The end of the record is stronger than side A; with songs like “Black Diamond Girl” and the reflective “My Daddy Was A RockNRoller” side B contols the highlights of the record. Before ending on a somber note Collett provides a brief attempt at a positive outlook with “Don’t Let The Truth Get To You.” Ultimately Reckon is a relaxing group of songs best fit for a rainy day and a glass of wine, what better way to shake the blues is there?