Concert Review: Scruffy & The Janitors at The Cafe Acoustic 11/17/12

You want to live vicariously through Scruffy & The Janitors when you see them live. They are young, energetic, talented and have one of the coolest bands in town. The are already building a solid following in the local scene and have started playing shows out of town but most importantly they get better with every show they play.

The band is not lacking in talent in the first place. That being said; anyone who has seen them multiple times like myself would have to not be paying any attention at all not to see the improvement in the young band. Lead singer/bass player Steven Foster already has a knack for writing songs with good hooks and the brothers Trevin (drums) and Teriq (lead guitar) are no slouches is filling out the band’s sound. The crunchy, bluesy guitar playing of Teriq gives the band their signature sound and makes their live shows a must see.

Scuffy & The Janitors played the Cafe Acoustic on Saturday November 17th carrying the whole weight of the night with no opening act. The group already has a large enough following to fill venues like this by themselves. This show was the ultimate promotion for the record release party that will take place in two weeks on November 30th at The First Ward House. The band would immediately proclaim that they would be playing their record Pino and tore into the first song from it “Post Meridian.”

They would follow suit for the first six songs of the evening before replacing the song “Rosie” with a jam-heavy tune they announced as what sounded like “Dirty Hand.” Other than the one substitution the first ten songs of the set would be entire album Pino sequenced as it will be on the album. Obviously this part of the show possessed many of the group’s best songs like the speedy-blues numbers “Know It All” and “There’s A Ghost.” The group’s best song to date is likely “I Will Pick You Up” as the song has evolved in the last few months as a great sampling of how good of songs this band can write and how good this band is going to be. 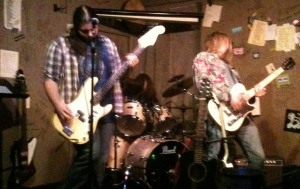 Scruffy & The Janitors jamming live at The Cafe Acoustic on November 17th, 2012. Lead singer/bassist Steven Foster on the left, drummer Trevin Newton in the middle and guitarist Teriq Newton on the right.

After playing Pino the band would stretch into a group of songs to finish their night that were newer or covers. The covers really let Scruffy & The Janitors wear their influences on their sleeves. After taking on the Flaming Lips’ “She Don’t Use Jelly” they would bust into a cover by their biggest influence The White Stripes. “Fell In Love With A Girl” is a guitar heavy, short little song that let Teriq indulge in his best Jack White impersonation. They would even insert a second White Stripes cover in the middle of the punky Stripes song with “Little Room” letting drummer Trevin do some cymbol crashing. They would then take on the traditional tune “House of the Rising Sun” that shows the band honors classic blues songs as well. Scruffy’s version of “House of the Rising Sun” is always a set highlight as they have a fresh, guitar-heavy take on it.

In the end the band put together a great, entertaining group of songs. The always superior sound at The Cafe Acoustic only complimented the band and made them sound better. The show was a huge advertisement to go see them at The First Ward House on November 30th where you can pick up a copy of their first ever recording Pino. I’ll be there, you probably should be too.

This entry was posted in Concert Review and tagged 11/17/12, album, blues, Cafe Acoustic, concert review, I Will Pick You Up, Is There A Ghost, November 17, November 30, Pino, record release party, Scruffy & The Janitors, Scruffy and the Janitors, setlist, St. Joseph, Steven Foster, Teriq Newton, The First Ward House, Trevin Newton. Bookmark the permalink.

1 Response to Concert Review: Scruffy & The Janitors at The Cafe Acoustic 11/17/12