It was billed as a prize fight but to be honest it was a bit of a mismatch. The differences between the two bands squaring off at the First Ward on December 21st were vast. Jerkface is a loose Cali-Ska-Punk mixture, while Missouri Homegrown is a straight up country-sleeze powerhouse. One band didn’t knockout the other on this night, rather the audience just got to see a bit of the range of music St. Joseph is currently offering. 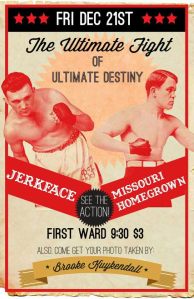 Jerkface was a surprise. What I knew about the band sounded erratic and unpredictable. A mixture of several different musicians and unique instruments is usually a recipe for disaster but Jerkface has their shit together. They are musically walking a thin line involving two guitarists, a trombone and a mandolin but they have found a way to make it work. The result is a distinct brand of surf-billy punk that is largely instrumental.

Led by guitarist and vocalist Jesse James and his vintage teal guitar with wavy distortion, the band played for about an hour to a great crowd reception. They would hit mostly originals but throw in versions of “Folsom Prison Blues” and “House of the Rising Sun” with trombone player Pete Baily singing on “House”. Keyboard/ukele player Brean Reilly also took her turn at the mic, singing while playing her ukele that was too low to hear throughout the night. Guitarist Ryan Early added essential guitar parts to offset James’ guitar playing and impressed throughout the night, tearing it up on a couple solos. Tommy Swarz on bass and Brian Shank on drums rounded out the rhythm section. Many of the best moments of their set were when the band let Shank loose on the drum kit, taking the music to a new, more intense level. 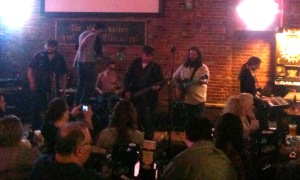 Missouri Homegrown would rule the evening even if Jerkface did impress the crowd stuffed into the First Ward. They take the stage with a swagger that is unlike any other local band. They acted like rock stars when they played and demanded the crowd’s attention as they blasted into “Bright Lights” to start things off. Drummer Josh Brown punches the band into “Bad Boy Blues” after a short “Will The Circle Be Unbroken” intro. The band’s set gets intense about 20 minutes in when bassist Corey Clark cues the band into the combination of “Another Way” transitioning into “Please Don’t Take Me Jesus.”

Vocalist Shay Fadden shouts into the mic prompting the heavy southern stomp of “Jesus” when he screams “So C’mon” sending the band into one of their heavier struts. Justin Early’s guitar keeps the song moving and lets Steve Hurley take off on an improvisational lead. Hurley steps up to crowd and unloads his arsenal on the solo that lasts a couple minutes. The band’s bass drum would break during the song causing a short delay where thankfully the guitar duo of Early and Hurley would cut through the treehole in the set by jamming while the equipment was fixed.

The band slows down the tempo with songs like “Alright” another song where Fadden pushes his vocals to their limit at points, and one of the band’s older songs “Wagon Wheel Motel.” They are always quick to bring the tempo back up though with rockers like “Take You Down” making them probably the best band in town at building a setilist. A Missouri Homegrown show almost always ends with the band’s two anthems. “Blame It” comes first with Fadden baiting the crowd to scream back “Get on the train and ride!” at him on cue. The audience however anxiously waits in anticipation for their chance to scream the line: “Blame it on the whiskey or blame it on that goddamn cocaine!” The balls-out rocker “High In Missouri Tonight” closes the evening out as the band’s themesong; after all they are called Missouri Homegrown. After that the band is done; get another PBR boys… you’ve earned it. 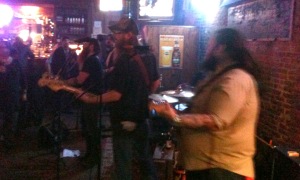 Missouri Homegrown playing live at The First Ward House on 12/21/12.

So the billed “prizefight” was essential the bands knocking the audience on their asses. Jerkface was very impressive for my first time seeing them and Missouri Homegrown simply doesn’t half-ass it and always knocks it out of the park. There is a tension between the two bands but musically they are a very good combination even though they are vastly different. Let’s hope there is a rematch soon.