Posted on January 2, 2013 by VocalsOnTop

The first show for a band is pretty rough. You’ve got those first day of school-type jitters and you can’t help but wonder if you’re ready. Thoughts of cold feet enter your mind and every little mistake will make you second guess why you’re there. That is of course unless you are playing with bandmates you’ve performed with for years and you have your songs nailed like Two Piece Animator does.

Two Piece Animator is a new band who played their first show December 29th at The Cafe Acoustic but you would’ve never known it by watching them. They took to their set with unblinking confidence. The band possess the entire cast of smart-ass St. Joe rockers The Ramey Memo as well as one new member. The new member, Ariel handles the bass for the band while Raye Lynn adds vocals, guitar and occasionally violin to the mixture. The duo of Tyson Bottorff and Garner Quillon formed yet another band together with a different style of musical output. Bottorff is the band’s guitarist and Quillon sings most of the groups song from behind his drum set.

Another new band would open the show. Sara Rose is currently a duo of Sara Venneman, who sings and strums acoustic guitar, and Kyle Culp providing lead guitar, also on acoustic. The pair looked timid on stage but still belted out a half hour set of all original songs. Venneman’s vocals provided a soft touch to her lyrics and the acoustic guitars made for a very intimate feeling environment. The songs give you the feel of a Jewel or Sheryl Crow record and the acoustic strums occasionally conjure up thoughts of a band like The Wreckers, particularly on Sara Rose’s last number.

Two Piece Animator would have a full 50 minute set in store for the eager audience. They would blast through Pixies-style alternative rock and would perform several songs so new that they didn’t even have titles as the set list would read for example “Song 11” and “Song 7,” one can only assume these aren’t the permanent titles; though Blur’s “Song 2” kicks ass. That one’s taken Two Piece Animator; stay away from it. 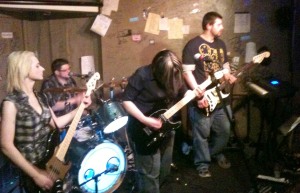 Two Piece Animator ultimately feels like the serious side of The Ramey Memo. The music is much different because of this. While the songs have a much more serious tone the banter between songs still showed they are as big as smart-asses as ever. Quillon would joke that they were a Billy Joel tribute band after the first song and it would be a running gag throughout the night. The crowd would occasionally shout out requests for Joel songs like “Piano Man” and “Uptown Girl.” The band would even introduce their cover of Pavement’s “In The Mouth Desert” as the Joel song “Downeaster Alexa.”

They would tear through an 11 song set and be handing out a demo cd of their work so far. The strongest of their songs appears to be “Sight Unsung” which came up early in the set with its big chorus of “I blame it on myself now” and its “Big Bang Baby” style driven guitar. Other strong songs by the band are “The End of It” which has a beginning that takes your mind to the beginning of the Foo Fighters’ song “Rope” and the very Pavement sounding “Headlights.”

The band showed that their act was very refined before they ever stepped on stage this night. They have a strong group of songs and stage presence wasn’t an issue for the experienced musicians. This show was a great indicator of what is to come from them. You can go ahead and add Two Piece Animator to the already lengthy list of very good bands going in St. Joseph right now.