Andy Grooms was a bit of a mystery to me going into this night. Having caught just a small portion of his performance at The Lucky Tiger a couple months ago, I knew of him and his music but not much else. He is a local act but seems to be pretty low profile and not be well known in St. Joseph. The rumors swirled that he would do a show at Magoon’s so I was in. I got my hands on a copy of his album Grateful To Burn and started studying. It’s always excited to find a new, talented act in town. 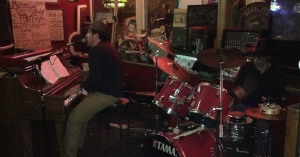 Andy Grooms took to his piano in front of the small bar audience. He would pick up on a conversation about pawn shops in the background and turn it into a request to play his song “Pawn Shop” to start things off. The epic song starts with a classic one-liner; “The saddest stories are on pawn show walls…” He would detail a pawn shop with vivid imagery like “Japanese guitars with scarred up pick guards” as he practiced his best 70’s era Tom Waits croon. Grooms would play the piano most of the night while his drummer would gently tap on his kit. The drummer didn’t add a ton to Grooms’ very lyric-focused music but didn’t take anything away either. He softly hit a lot of cymbals and added just a little bit of flair to the sound while never being loud enough to walk over Grooms’ vocals.

Grooms has country roots in his music but the piano accompaniment disguises it. He would occasionally pick up an acoustic guitar to play a few songs but mainly stuck to the piano. When he played songs like “Mississippi Parking Lot” that country side would shine through. That song is originally by Grooms’ now defunct band Pawtucket that achieved a decent amount of success as Memphis, Tennessee alt-country group, selling thousands of albums. The vocals on “Mississippi Parking Lot” would even slip into the Jay Farrar range which is very seldom to see and only added to the country sound.

Grooms hit some songs from his album Grateful To Burn that would be highlights for the evening. He would work though the gentle songs “Itch to Scratch” and “I’m Not So Sad” but the true highlight would come with the song “Decadent Eyes.” With haunting lyrics like “In some social circles parents eat their babies, wouldn’t it be best if we all ate out?” and “Love the one you’re with, it beats being alone.” how could it not be? 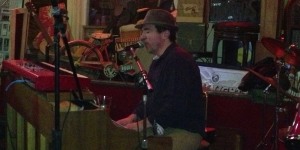 As Grooms finished his set with admiring covers of the Beatles “Blackbird” and “That Lucky Old Sun,” most famously done by Frankie Laine, a song he had recently been obsessed with, he took a moment of reflection. He said something along the lines of “You can play for 100 people and feel like crap and you can play for 10 people and feel great; so thanks for sticking around.” Whether this comment was specific to this evening or not isn’t really important; it seemed sincere. I was glad I stuck around as well, I should be so lucky to discover such an interesting and talented individual every so often.