Quixotic- A Show Like You Have Never Seen Before 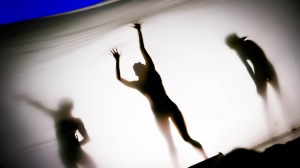 Quixotic is not your run of the mill band or music performance.  In fact, it is not your typical anything.  Quixotic is its own animal, a moving world of curiosities, a thing of confusion and bewitching creativity, as if Cervantes’ great dreamer Don Quixote had his head burst open and had all his dreams and fantasies rushed to be center stage.

On February 9th at the beautiful Missouri Theater in St. Joseph, Missouri, you’ll have your chance to see the mad wonder of Quixotic first hand.  Formed in Kansas City by percussionist/director/composer Anthony Magilano and Assistant Art Director Mica Thomas in 2005, Quixotic was a way to challenge themselves as artists and by extension, changing the way people perceive art and the artistic experience.  Quixotic, as a group, push past convention, past just a band on the stage, to entertain all the senses.

In addition to the main members (Magilano, Thomas, Shane Borth, Noel Selders, principal aerialist Megan Stockman and principal dancer Laura Jones), there are accordionists, cellist, violinists, visual/audio effects, fire, lighting installations (Thomas did has graduate work in lighting design at Penn State), groundbreaking compositions coupled with high grade technology.  All of these elements and imagination work together to create an experience that is all-inclusive, completely enveloping and mesmerizing for the members of the audience.

Quixotic can be seen as what would happen if Cirque de Soleil played gigs with The Flaming Lips or Pink Floyd but that too simplistic, a cop out of a description, lazy.  Quixotic is more than that, it is something new, pushing the imagination and boundaries in their non-stop effort to give fans something new to see,  something to dream about at night in their beds, to talk about at work.

The Kansas City collaborative have taken their carnival of wonder both far and wide, gracing the stages of the Wakarusa Music Festival in Arkansas, the TED Conference in Long Beach, the Wanderlust Festivals of Vermont, Colorado and California and the multi-genre festival Electric Forest in Rothbury, Michigan.

The beauty of the Historic Missouri Theater will surely add to the eclectic adventure that is Quixotic.  Open your mind, take a seat and enjoy the ride.

Watch their videos at www.vimeo.com/quixoticfusion