Local H’s music is filled with anger and hurt feelings. The Valentine’s Day eve show in Kansas City for the band was a little ironic because there is very little of the sweet sentiment associated with the holiday in the group’s music. A Local H setlist reads like a handbook for the heartbroken at times. The band would trot out the appropriate song “Lovey Dovey” for Valentine’s Day but the heartbreak was more apparent than the romanticism as a whole.

It was like being at a show and being able to look over your shoulder to see your ex-girlfriend behind you. When Lucas sings lyrics to songs like “Sad History” it’s hard not to see that ex standing next to her new beau. The heartbreak is all over their set in tunes like “The One with “Kid”” detailing splitting up a record collection after a breakup and when Lucas sings “Another February so much worse than January” during “Another February” you can feel your heart sink just a little bit.

Before the handbook reading started; St. Joseph’s estranged sons, Radkey, would open the show. The group of three young black brothers would take The Record Bar stage and, as always, deliver exactly what they promise. Their fast-paced, abrasive, Misfits-style hard rock was a perfect lead in for Local H. Scott Lucas of Local H would even later say about Radkey: “All my friends have been telling me about you guys… and they were right.”

St. Joseph’s estranged sons, Radkey, perform at The Record Bar in what they would dub a “dream gig” opening for Local H on 2/13/13.

Radkey tore through tunes like “Mind Ride” with soaring guitar solos by singer/guitarist Dee Radke. The young singer would stare intently through the dreads covering his face while he sang the lyrics “You’d better run, he’s coming for you” during “Cat & Mouse.” Bass player Isaiah Radke would be the most active and the voice of the band and 15 year old drummer Solomon Radke would celebrate 15 years sober according to his bass-wielding older brother. After a broken guitar string during “Little Man” Isaiah would observe “Your not doing it right unless your breaking shit.” The crowd would be timid early in the set but by the time the band got to the song “Red Letter” toward the end, the audience would give them a lengthy and emphatic ovation. They would close the night by educating the almost entirely white crowd with the guitly-pleasure sing-along tune “N.I.G.G.A.(Not Okay)”.

Local H would follow the half-hour power set by Radkey with an ear-bleeding display themselves. They would punish ear drums for people all over the small bar with the straight-out guitar crunch of “Heavy Metal Bakesale” and “Night Flight To Paris.” Those two songs would be part of eight songs the duo would play from their newest record Hallelujah! I’m A Bum, composing roughly half of their set. It would seem the Kansas City crowd would not know the new material near as well as the Omaha crowd did just one day after the record’s release when I saw them late last year.

The “classic” Local H songs were in the set though as well. “Hi-Fivin’ MF” always gets a huge crowd reaction (meat heads love screaming the word “fucker”) and “California Songs” definitely fit the bill as what Lucas labeled it; “a Midwest anthem.” Their most famous song “Bound For The Floor” would even have a nice tip of the cap to The Stooges with a little “T.V. Eye” portion thrown in and “Hands On The Bible” always makes the drunken guy behind you sing every word slightly off-key so he can prove he knows the song. “All The Kids Are Right” may be one of the best concert songs ever written; it has killer stop-start guitar parts and brutally true and humorous lyrics about a band not living up to expectations live. The song also gave ample time for drummer Brian St. Clair to wheel around on his stool and soak up his small fan after enduring lengthy stretches of his industrious drumming. 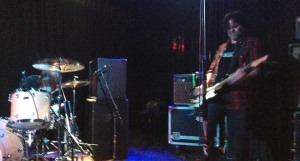 Chicago rockers Local H perform at The Record Bar in Kansas City on 2/13/13.

The personal true highlight was hearing the brilliant “The One With “Kid”” with its band and record naming tactics. It possesses the brilliant line with double meaning; “My heart of glass is scratched.” Lucas wouldn’t be able to keep up with the “ooh ooh ooh” hooks in “They Saved Reagan’s Brain” because the set was so high strung. This wasn’t surprising considering the amount of scream-singing Lucas does during a night. Few singers sound as good as Lucas when shouting so loudly into the mic, the really amazing part is that he puts so much into his singing each night and his voice doesn’t give out.

The set would appropriately end with a cover of The National’s “Terrible Love” that really tied in the theme of broken hearts for the set. As Lucas would crowd surf his way back to the merch table the exhausted audience would realize their ears would be ringing for a week. What better way to sooth your mending heart on Valentine’s Day eve than hearing the lyrics like “So baby could you do me a favor, fall off of the earth and I’ll see ya later” and hoping you don’t cross paths with your ex on the way out the door, whether she is really there or not.