Dsoedean vs. This Tall Records: The Story of Continue To Move

Dsoedean is an eager St. Joseph, Missouri based band who plans to release their first full length album Continue To Move this spring. The only problem is that Dsoedean is signed to the small independent label This Tall Records based in Savannah, Missouri.

“The record should already be out.” says Zale Bledsoe, lead singer of Dsoedean. “We thought attaching ourselves to a label would speed up the process of things like this.” The head of This Tall Records asked not to be named in this article but was glad to give me his side of the story. For the purposes of this article we will call him Jordan. Jordan said “Bands just think that you can record anything and an album magically happens… there is a reason bands want to be signed to labels, so they can have the financials taken care of.” Jordan would go on at length about how a once great relationship between he and Bledsoe slowly turned sour as the record Continue To Move clogged production for This Tall Records and Dsoedean.

The anticipated album cover of Continue To Move by Dsoedean.

“We are a small label and we value our artists,” Jordan says “at some point you have to focus on other artists though.” Dsoedean started conception of the album in early 2012 with songs dating back to when the band first formed a couple years before. Bledsoe was joined by local musicians Bobby Floyd on drums, Marcus Words on bass and Colby Walter on guitar and keyboards for the recording. Bledsoe, the obvious leader and drive behind Dsoedean, was outspoken about troubles from the beginning in recording the record. “We want to do it right” Bledsoe said, “We want a professional product, that’s why we went to a label.” The band is revered in the local music scene and the music from their 3 studio EPs and one live EP are well known in the St. Joseph area. Friends and fans of the band are loyal to seeing the group when they play in town, they always ask the same question though, “How’s the album coming?”

It started with the idea of a vinyl single according to Jordan, the music was originally planned to be released as a cd but then the group decided on doing vinyl and the relationship between the band and record label became strained. “Vinyl is expensive to make.” Jordan would say “Yeah, vinyl is cool and hipsters love it but damn it, it cost a lot of money to press and it is difficult to make that money back.” Bledsoe said on the vinyl issue that it is important to him. “We are making a statement by putting our music on vinyl, anyone can throw some tunes down on a cd-r and call it an album; our music matters and the record will indicate we are serious about it.” There will also be digital downloads and cds but the vinyl is a selling point for the band. 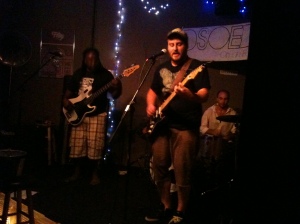 Dsoedean at the Cafe Acoustic in 2011 before Colby Walter would join the band.

This Tall Records has had good luck with other artists such as Wade Williamson and For The Sound in releasing music quickly. Their music is available on the bandcamp website for download all the payments go through This Tall Records. Pressing music to vinyl is simply a longer process and it can’t be as instantly gratifying. The record label is even working with other groups for future releases including Blues-funk powerhouse The GasTown Lamps and the mysterious Sexwolph.

Kiley Bodenhamer recorded Continue To Move for Dsoedean and felt caught in the middle between the band and label. “The band would tell me to do one thing then (Jordan) would call me up and tell me he wanted it the exact opposite way.” Bodenhamer has worked with the band in the past but says this record was far more difficult to record. “The band wanted to get it right and the label didn’t wan’t to spring for extra studio time. At one point I thought about putting my name on the project under an assumed name but (Jordan) said that would be the name on the my check and I didn’t think the bank would cash it. [laughs]” Bodenhamer says.

Here is a video of “Daylight” from the much anticipated Dsoedean album Continue To Move to get your blood flowing:  http://www.youtube.com/watch?v=LR_gDC0KH_4

The Dsoedean album being pressed to vinyl isn’t the only problem in the relationship between the record label and band. “They told us not to play” drummer Bobby Floyd says “They put a hold on our local shows to try to build up anticipation for the album release. I have a newborn that needs diapers and baby food, I need all the extra income I can get from those shows and we can’t play now.” Other members of Dsoedean took an interesting approach, they ambitiously took on side projects. Marcus Words is now a regular with rising country star Aaron Blumer where he plays bass. “It pays some bills” Words said “I’d love to be playing with Dsoedean but when the shows aren’t there I grab my bass and go play with Aaron.” Colby Walter spread himself a little more thin than Words, he would play with several bands. Walter plays bass in The Motors, plays solo shows, has been linked to the band Jamazon Cloud and things have recently picked up on his mandolin gig with The Souveneers.

So what is Bledsoe doing? “I’m playing some solo shows now, I mean I can’t draw the audience that Dsoedean does, but I have my own songs and it keeps me sharp while Dsoedean is on hold.” Bledsoe is constantly in negotiations with This Tall Records to get things going on Continue To Move. “The record to me is basically everything I’ve ever done musically put into one place, it took us a few months to record but it took me well over 20 years to conceive that record. I can’t stand the fact that it is just sitting on the shelf right now”

Jordan promises it will see the light of day. It will be out on cd and digital download and there will be a 7 inch vinyl single. No release date is set as of yet but the wheels are turning on it. “He (Bledsoe) doesn’t realize that this record is very dear to me too, it is almost as if I recorded it and sang on it myself; my blood and tears are in that music as well.”

Almost none of this is true; there were no interviews done for this article. It is true that Dsoedean will be releasing Continue To Move on This Tall Records, just about everything else is total bullshit. This is intended as a honorable tribute to one of my favorite bands. I’m proud of the guys for doing their record right and not rushing out an inferior product. Continue to move gentleman. Happy April Fools Day!