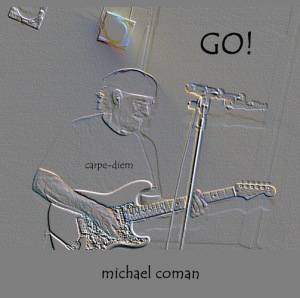 Michael Coman has been a St. Joseph mainstay for years now. Putting in countless hours at hole in the wall bars, playing to four people, hearing the echo in the tip bucket is all par for the course. It doesn’t matter how good you are sometimes; it is hard to capture an audience.

Michael Coman’s Go! is a forgotten piece of St. Joseph music. This well-recorded album has several gems on it. The opening track “Peace & Love” is nowhere near as corny as the title would lead you to believe and the hooky guitar and drum beat will draw you in right away. Influences are worn on Coman’s sleeve for the record which is no way a bad thing. It takes about a half second into “Give It To Me” to hear the George Harrison style guitar and the raspy vocals of “Burden Down” could have came straight out of Warren Zevon’s lips.

Songs like “B” and “Get On Board” read so personal that it feels like they were written for a very small audience that you aren’t a part of but for the same reasons are personally relatable. The head-bobbing, toe-tapping stomp of “Monkey” may be a perfect addition to your driving mix cd (though it might garner you a speeding ticket if not careful) you’ve been working on and the songs “Go!” and “Drive Me Crazy” will make you want pick up a guitar and start picking for yourself. Go! is a steady mixture of classic rock and blues that doesn’t wear thin with repeated listens.

You can catch Michael Coman playing live with The Woodpile, a band containing his wife and son and see some of these songs. His album Go! is available at http://michaelscoman.bandcamp.com/album/go-carpe-diem. You can download it for free but if you like it be sure to tip him a couple bucks when you download it or go see The Woodpile live and tell him you dug it.