The best songwriters can pierce you to the bone with just one line. Hidden among the lore of Jesse James and the Pony Express in the town of St. Joseph, Missouri lies one of these songwriters. Tracy Huffman has been out to the California coast to soak up the sun after starting with humble beginnings in the Midwest and has comfortably found his niche right here where he started.

Huffman strolls into Magoon’s Delicatessen wielding not much more than his black acoustic guitar case and after prepping for the show sits down to glance up through his long black hair to see a small audience ready to linger on each word he has to say. It is an every Wednesday occurrence for Huffman to setup shop for about 3 hours in the downtown bar. The buses will visibly zip by in the window behind him and occasionally a police car or ambulance will create the closest thing Huffman will ever have to a light show in the small venue. 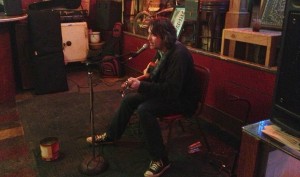 Songwriter Tracy Huffman raids his songbook at a weekly show at Magoon’s in St. Joseph, Missouri.

Huffman’s biggest fan is likely the grey haired bartender Doug Snyder who can be found slinging suds from behind the bar. He happily sings along with nearly every line enjoying what is likely his favorite night of the week to work. The Magoon’s regulars all know Huffman’s music and give him requests when he looks like he is in a quandary of what to play. When a friend yells out something like “Somebody’s Buried There” Huffman takes a brief moment to take stock of the song in his head and nearly flawlessly trots it out. Huffman pulls from his entire career’s catalog to fill out his mental setlist for the night. Nothing is set in stone and seemingly nothing is off limits for him to play. He also mixes in several covers of songs you can tell the songwriter loves himself.

He plays acoustic on this night but occasionally pulls out an electric on occasion as well. He would perform a solo set for the Magoon’s crowd but on any Wednesday could pair himself with local blues legend Jerry Forney, jack of all trades Colby Walter, The Motors bandmate Sean Cleary or one of a few other musicians. His guitar playing can’t be ignored as well, he comes up with good, original licks and has no problem keeping up with whoever is on stage with him.

His strength is always in his originals however. These songs are delivered with a stark honesty that is apparent to anybody who takes a break from their conversation to listen. He has an amazing ability to deliver a knockout punch with just one line of a song. Doug Snyder’s favorite Huffman line may well be “You feel like a bomb, that never got lit.” For me personally it was a line from a song off of Huffman’s latest fantastic album Pieces, “Dark Side of the Road.” The lyrics “Take me by the hand, the way my baby never could, because my baby’s got a heart, but ain’t no damn good” hit me in a way where they are far more personal than Huffman could have ever intended.

The brilliant singer/songwriter trolls through covers of artists like Tom T. Hall, John Prine and Randy Newman as well as hitting some songs by the most giant artists of all time. He started this particular evening’s set with “Tomorrow Is A Long Time” originally by Bob Dylan before quickly moving to a rendition of “The Needle and The Damage Done” by Neil Young. A more playful cover of Tom Petty and the Heartbreakers’ “Listen To Her Heart” would fall later in his set. The most entertaining songs always come straight out of Huffman’s pen. The brilliant line that Snyder loves is from “The Great Unknown” and the duality of the song “Jerry” is always fun to try to figure out; in-between Huffman adds the great radio-ready pop-folk of “Jealous Boy.” A loving tribute is payed to possibly Huffman’s greatest hero with “Chuck Berry’s Red Guitar” and he pays homage to John Prine or possibly Billy Joe Shaver with his tune “Pissin’ In The Wind” then follows with a conceivable devil’s advocate to Neil Young’s “The Needle and the Damage Done” with his original song “Drugs.”

The cold hard facts are that you can see Huffman with a dozen or two of your closest friends on any given Wednesday at Magoon’s in St. Joseph. The songwriter has the resume and talent to justify him playing to a crowd of triple digits every week but the small town is lucky enough have this jewel hidden away within it’s classic buildings and historical lore. The power to relate to a complete stranger with one simple song lyric isn’t a common thing; anyone who wants to pay attention to Huffman could find a shocking personal connection at any given time and should feel grateful for the opportunity.