Jack White and Dan Auerbach’s influence is being painted all over modern music. These two visionaries spearhead this latest “update on the blues” and their disciples are sprinkling the music scene as we speak and audiences are eating it up. Going hand-in-hand with the resurgence of vinyl records; this is the sound of now; this is the sound the cool kids want to hear.

A direct result of all of this is guitar-slinging bluesman Hanni El Khatib. Khatib’s momentum from his recent release of his second full-length record, Head In The Dirt, carried him through Kansas City to the hot, packed Riot Room where he would sweat out about four pounds during his hour long set along with opening acts The Devil and St. Joseph’s Radkey.

El Khatib would naturally be headlining so two opening acts were due up first. The Devil would grace the stage the earliest with a slow burning metal sound made by three women and one guy. The bass and drums held ground for the male guitar player to add most of the texture to the music while the group did their best to emulate a brooding Black Sabbath. The lead singer would attempt to lose herself in her vocals but appear a bit tense; she couldn’t have been too nervous with the outfit she was wearing however because it was showing more skin than you’ll see during the average concert. Their dark music (matched by the stage lighting drenched in dark orange) seemed to stay in first gear all night and could have benefited from a couple faster musical breakouts.

The Devil would at one point naturally pimp that they had t-shirts for sale and ask people to find them on facebook. This is a very great task to ask with a generic name like “The Devil.” Try putting “The Devil” into google and finding them; it is a horrible selection of a band name. They will go on the list with the all-time hardest bands ever to find on the internet. Among these are The The, The Band and the all-time worst band to find on the internet; Live.

The Devil (the band, not the ruler of the dark) soak up the orange stage lights at The Riot Room.

Radkey is one of the hottest names in the Kansas City area right now and they would hit the stage next. They were recently added to regular rotation on 96.5 The Buzz in Kansas City and two of the regular on-air personalities (Lazlo and Slimfast) were even on hand to see Radkey and of course El Khatib. Being a veteran of over a half dozen Radkey shows now I knew exactly what to expect and that is exactly what I got. Their punk sound is only accented by their costumes that they don at each show: the flannel, the cut-off jean jacket and mo-hawk. All the mic time in-between songs would belong to bass wielding Isaiah involving much of the same banter I’ve heard before and a not very surprising little shot at their hometown of St. Joseph.

Radkey’s set led off with “Out Here In My Head” and “Mind Ride” to get the exuberant crowd bouncing. “Is He Alright?” has a slightly different feel than other songs by the band and is a nice addition to their set to break things up a bit. The audience was buzzing and had a few people that obviously just showed up for Radkey. The response for “Cat & Mouse” was particularly emphatic because of its recent plays on 96.5 The Buzz. They would end with the catchy “N.I.G.G.A. (not okay)” and seamlessly move into a cover of Outkast’s “Hey Ya” a song that I once heard them say was for St. Joseph only. Everyone in the crowd that I talked to was seeing Radkey for the first time; they blow first time viewers away nearly every time and this show seemed to be no exception. It will be interesting in the future to see how people respond to the band after they have already heard the songs, listened to the banter and saw their uniforms before.

Radkey continues to kick open doors so hard they tear the hinges off. Lead singer Dee Radke (above) playing at The Riot Room opening for Hanni El Khatib.

Radkey setlist for 5/9/13 at The Riot Room in Kansas City, Missouri.

Hanni El Khatib took the stage for a rare headlining gig on his 2013 tour. He is in the middle of a set of dates opening for The Black Angels and El Khatib had just this and one other date with his name in the largest copy on posters for this tour. The small, 240 person capacity Riot Room was very close to a sellout if it wasn’t. It was shoulder to shoulder with sweat beading up on everyone’s skin by the time El Khatib found the stage lights. He would hammer into his set with one of his best songs early in “Build, Destroy, Rebuild” with its very New York punk feel that got the crowd all stirred up. He would follow with a newer song, “Nobody Move” that proved he wouldn’t be playing venues the size of The Riot Room much longer.

Hanni El Khatib would carry three other band members with him; a drummer that would make the bass drum bounce so hard on the stage you thought it was going to walk off, a bass player and a guitar/keyboard player. Ultimately even though El Khatib’s music is very guitar heavy; the songs with keyboard seemed to come across better than having dueling guitars. The show didn’t have the soaring guitar work I expected. It was no slouch by any means but I expected a little of the “guitar masturbation” that is common with this type of music. A crowd favorite would be “You Rascal You” getting a good response but the track ultimately pales in comparison to his other songs. The doo wop of “Dead Wrong” was a brilliant change of pace for the set giving a nod to the 50’s sound that you can hear in his music if you listen carefully. 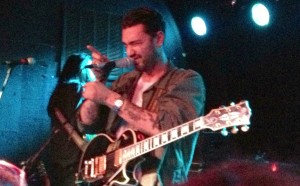 Hanni El Khatib gestures to fans at The Riot Room in Kansas City, Missouri on 5/9/13.

The set would roll through many songs from his new record Head In The Dirt and the presence of The Black Keys’ Dan Auerbach on those songs could be heard on nearly all of them even though he wasn’t in attendance. El Khatib has certainly used the cross of The White Stripes and The Black Keys to form his bluesy sound for his new album. He would play nine of the eleven tracks off of that album including “Pay No Mind” “Can’t Win Them All” and “Save Me.” He would also hit the record for the shows slowest moment with the song “Penny” as well as the song with the best legs for radio play “Family.”

In lieu of an encore he would remain on the hot stage and power through the set mainly because there is no backstage and he would have to fight the crowd to get off and back on. The encore set would be two songs and include “Family” followed by “Loved One.” The jangly, hit powered “Family” probably would have made for a more climactic finale but it would be the first of the two songs. After the song the band would hit the side door to go outside and try to dry their sweat-soaked clothes. It was obvious at this show’s end that this bluesy rock style of music has a loyal audience and is here to stay.

Hanni El Khatib setlist for 5/9/13 at The Riot Room in Kansas City, Missouri.