Concert Review: Queens of the Stone Age / The Killers at Buzz Under The Stars 8/3/13

I hate big shows. I always wish bands I like the most success possible but bigger shows simply aren’t as enjoyable for me and I feel most concertgoers. It is inevitable that as bands gain popularity, more people will go to the shows. It is a true catch 22. I believe this only adds to the resentment toward bands like The Killers, The Black Keys and even U2. If these bands were playing 2,000 seat venues there would be less “I used to like them…” attitudes toward them.

So in this case, it was the combination of The Killers and Queens of the Stone Age being scheduled together making for a huge show. This was a showcase of bands played on 96.5 The Buzz for their event Buzz Under The Stars, the second of the year. The setting was Cricket Wireless Amphitheater but it will always be Sandstone to me. Queens likely would not have played this venue alone but The Killers might have. Either way, the combination led to an even larger crowd. I understand the fact that people love to see two great bands on the same bill but I think the consequences aren’t fair pay-offs for that privilege.

The evening would start off after the repulsion of having to pay $10 to park a vehicle for a few hours with a long walk to the gate. Already with a growing sweat patch on the front of my shirt it was apparent what kind of evening this would be. The trip to the front gate then the ridiculously long line to get a wristband for the pit by the stage would be adorned by the sound of the first band, The Virgins. The group sounded like they had listened to their fair share of Tom Petty and Elvis Costello and wore it on their sleeves, this is not a bad thing. Sight unseen, they sounded good from afar.

The stage would next be filled (and I mean filled by an eight member band) by Gogol Bordello. The group played a set of extremely high energy music that I would call Spanish gypsy ska. The band members would run circles around each other while the very chorus heavy songs would push a call and response to the audience to which sweaty attendees gladly obliged. The group had members from all over the world in the band and the music reflected it. Lead singer Eugene Hütz would emphatically dance around with no shirt on and boxing shorts with his acoustic guitar on his back for more than it was played. They would rile the crowd up with political songs like “Start Wearing Purple” and “Brave The Spell.” The groups sound and stage show was incredibly erratic and interesting to watch. The music however was layered with so much instrumentation and the stage antics were so busy that it was hard to concentrate on anything. It was like being thrown into a rave in middle of the day, you just couldn’t see the glowsticks. 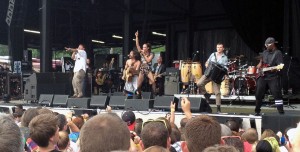 Gogol Bordello whips the crowd into a frenzy at Cricket Wireless Amphitheater in Bonner Springs, KS on 8/3/13.

Queens of the Stone Age would make their mark on the stage next. Not fitting with Gogol Bordello or The Killers that well in my opinion; their fanbase at this show was very distinct and easily identified. Josh Homme would come out with his sleek silver guitar reflecting the sunlight and blast into “You Think I Ain’t Worth a Dollar, but I Feel Like a Millionaire” and “No One Knows” off of their 2002 masterpiece Songs For The Deaf. They would hit their last three records exclusively during the show, completely ignoring their genius first two albums. The set was still incredibly tight though. The sonic power of the band made the hair on my arms stand up from my spot in the pit and it will not be an experience that I will forget anytime soon.

The set saw them take on the brooding “Burn The Witch” and the brash guitar work of “Sick, Sick, Sick.” Guitarist Troy Van Leeuwen would keep to stage left and carry almost as much weight of the guitar playing as Homme, which is absolutely essential to achieve the sludgy guitar sound of Queens. Homme would take to the piano for “The Vampyre of Time and Money” but would ultimately just prove that any song without a guitar in Homme’s hands is a bit bittersweet. The new songs sounded brilliant live; Homme’s slide work on “I Sat By The Ocean” was to die for and the groove stricken “If I Had A Tail” proved to be highlights. They would end with the ferocious “Go With The Flow” and the heavy “A Song for the Dead” would send them off stage. 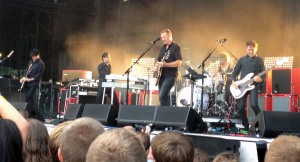 Queens of the Stone Age steal the show at Cricket Wireless Amphitheater in Bonner Springs, KS on 8/3/13.

The long setup of light boxes, backdrops and other flashy things would delay the start of The Killers set. As the vice tightened low in the pit the seconds seemed to take a bit longer to tick by and the heat intensity would continue to grow. It would be difficult to fight your arm above your waist to wipe the sweat from your brow and an air of excitement drenched the amphitheater. The Killers would blast out of the gate with “Mr. Brightside” and the pit would start to bounce. Brandon Flowers would prove that he is one of the best front men in the game, covering all fronts of the stage and getting the entire audience into the show.

After playing the only redeeming song from the band’s terrible 2008 album Day & Age with “Spaceman” they would go back to their well of old songs with a stellar version of “Smile Like You Mean It” and a version of “Bling (Confession of a King)” that would fail to enthrall. They would perform their (as always) killer (no pun intended) version of Joy Division’s “Shadowplay” before moving into less appealing songs. When they broke into “Human” the visions of a Brittany Spears style dance routine entered my head and make me remember why I don’t love this band the way I used to. “Human” is a flat out awful song and almost singularly made me lose faith in the band. The crowd loved it and I’m sure they listened to on their way home on a mix-tape alongside some Christina Aguilera and vintage Janet Jackson. After that, not even great songs like “Somebody Told Me” and one of the greatest rock songs of the last decade “When You Were Young” could get me all the way back into the show.

The Killers have become an arena rock band; at times the lasers coming from the stage were so bright you couldn’t even see the group. It is unfortunate when a band becomes big enough that they have to do things like this that simply make the music a second class citizen. The Killers have always strived to be this though; this is where they belong. Queens of the Stone Age however wasn’t where they belonged. They should have been in a different venue with better supporting bands. A place where their fans could be with their other fans instead of being outnumbered 3 to 1 by Killers fans. This is all consequence of the big show. As I said: I hate big shows.

The Killers go over the top with smoke machines, lasers, light boxes and pull out all of the stops at Cricket Wireless Amphitheater in Bonner Springs, KS on 8/3/13.

This entry was posted in Concert Review and tagged Brandon Flowers, Buzz Under The Stars, concert review, Cricket Wireless Amphitheater, Day & Age, Eugene Hütz, Gogol Bordello, Human, If I Had A Tail, Josh Homme, Like Clockwork, outdoor venue, QOTSA, Queens of the Stone Age, Sandstone, Songs For The Deaf, The Killers, The Virgins, Troy Van Leeuwen, When You Were Young. Bookmark the permalink.