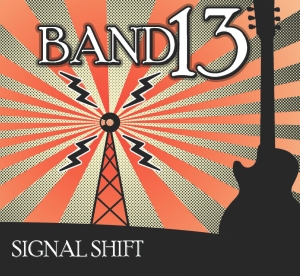 Kansas City group Band 13 attacks with a shotgun style approach on Signal Shift. They switch gears often going from hard rock to funky grooves and even take a trip to the farm for a little down home country. The album shows the band’s range and also shows how much they aren’t content to stick within one well formed rut.

The smooth Red Hot Chili Pepper grooves on “The Sweet Majestic” and “Deja Vu” is an odd combination to be so close to the intentionally tongue-in-cheek country-fried “Beastboy Shindig” but neither style is where Band 13 is best heard. The majority of the album is made up of songs like “The Last Living Dinosaur” with its loungey groove that sounds like it was spawned on a southern California beach. When you hear the Nirvana style feedback at the beginning of “All Night Long” and hear the Zeppelin sounding guitars on “Zero Warning” you can tell that the band is honed in. The Iron Maiden style vocals that adorn “Zero Warning” and “Light Years” show that Band 13’s influences flow far deeper than the Chili Peppers and make for the better songs on Signal Shift.

When the distortion is buzzing and crunchy riffs adorn the lyrics you’ll see the true Band 13; the album shows that country twang and funk are in the arsenal as well but the rock is what will keep you listening.