Todd Snider has no children; doesn’t want children actually and he just records and tours. Todd Snider pretty much just plays music. When one tour is over it seems the next is being planned and his fans never tire of his shows because each one is just about as unique as it could possibly be.

Snider is a storyteller. He loves to tell stories and his songs are just an excuse to tell more stories in between telling stories. His anecdotes are outrageous and hilarious and even in the cases where you have heard him tell the same stories before he still makes it fresh and you can’t resist laughing.

The Coal Men would open his show at Knuckleheads in Kansas City on 10/16/13; almost one year exactly since Snider last played the venue. The Coal Men are fellow East Nashillers and it is a good thing because apparently being from West Nashville is a bad thing as the group joked on stage. The band had a relaxed approach to their no frills style that you would expect from Nashville. A Steve Earle influence was written all over them but when done well it is always enjoyable. They played a solid set highlighted by their song “Midnight You” that had a delicate touch on its alt-country groove.

The Coal Men channel a little Steve Earle live at Knuckleheads in Kansas City on 10/16/13.

Todd Snider came out and immediately grabbed one of the many instruments on stage; a mandolin. He would appropriately pluck at it while almost talking his way through “Play A Train Song” with a very slowed down rendition. This approach would ring true for much of Snider’s set as he would rarely kick back and sing. This worked well for story songs like “Just Like Old Times” and “The Devil You Know” but would hinder other songs like “If Tomorrow Never Comes” and “In The Beginning” as it took much of the punch out of those songs. The song most effected would be his call and answer anthem “Stuck On A Corner” where the crowd shouts back “Yeah, Yeah” to the lyrics; it didn’t ruin the song but it made the pace awkward and took some of the fun out of it.

The first set would end with Todd strumming away with “Ballad of the Devil’s Backbone Tavern” but when a train whistle from the very close train tracks kept his vocals from being heard it derailed Snider. He would wander off topic and not even finish the song. He would go into a Jerry Jeff Walker story where he proclaimed that he was able to defeat his hero and now friend, Walker, in trivia contests… about Walker himself.

The second set would pack a little more punch than the first and include more songs. He would cover his requests with this set and there would be several. He would play “Conservative Christian Right Wing…” at a request, a song that has grown boring for me and I’m sure other Snider fans share the sentiment. He would also pull out some great, surprising songs like “That Was Me” and “Big Finish.” An unfortunate theme of the night would be cover songs with Snider diving head first into them and doing a total of five. A rain would start to fall during the second set and no one would be effected in the outdoor venue. The temperatures were cold and the rain didn’t help but the show was more than enough to distract the crowd from the less than stellar conditions. 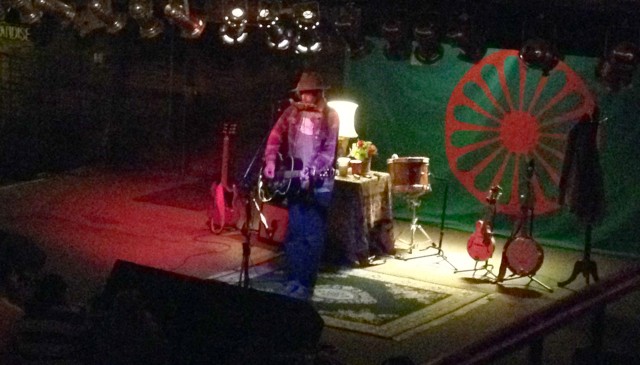 Todd Snider plays through the rain and cold outside at Knuckleheads in Kansas City, Missouri on 10/16/13.

His standard Jerry Jeff Walker cover of “Mr. Bojangles” made a lot of sense and a take at Neil Young’s “After The Goldrush” was a very nice surprise to hear. He would also hit on Rusty Wier’s “Don’t It Make You Wanna Dance” and The McCoy’s “Hang On Sloopy” that were less thrilling. His encore poem about Gary Coleman was funny in the classic Snider humor and at last he finally reached for his electric guitar. The electric taunted me all night as I had never heard him play one, when he did finally pick it up it would be for a crowd sing-a-long of a sloppy version of “Hang On Sloopy.”

As always the show had brilliant high points however. “Alright Guy” is one of the finest songs he has written and I was thrilled to hear “The Devil You Know.” “Broke” was a nice song to throw in that he doesn’t play very often and I remember last year yearning to hear “In The Beginning.” a wish that was fulfilled this year. A Todd Snider show is always fun; this is all the man does and he has found a way to make his stage show different every time, something you can’t say for about 98% of the acts you will ever see grace the stage.

Todd Snider setlist from Knuckleheads in Kansas City, MO on 10/16/13: