250 Word Album Review: Queens of the Stone Age – … Like Clockwork

Posted on December 8, 2013 by VocalsOnTop 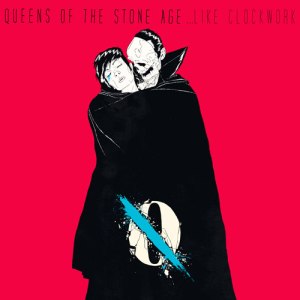 I tried to resist the charm of ...Like Clockwork for months. From my first listen I knew it was good but I never could get a clear read on the record. At one time, this was a three and a half star album if I was to review it; but I waited… and waited… because my opinion of it kept changing.

…Like Clockwork has gotten better with each listen for me since I bought it on the day it came out all the way back in June and I give up, I’m now ready to give it the 5 stars it deserves and start preparing a spot for it atop my top 10 albums of 2013 list. The first half of this album is one of the strongest starts to a record I’ve heard in years; with ” I Sat By The Ocean” “If I Had A Tail” and “My God Is The Sun” it has all the rock and grooves that every Queens fan could want. It also has the slow burner “The Vampyre of Time and Memory” that is great but anytime Josh Homme isn’t holding a guitar it seems like a wasted opportunity. The second half is no slouch either; highlighted by the signature Homme licks in “Smooth Sailing” that proves that Queens of the Stone Age is simply the best hard rock band on the planet right now.

The record is dark and beautiful with fits of rage and moments of reflection. These 10 songs put quite bluntly won’t be forgotten for a very, very long time. Not only will …Like Clockwork reign as one of the best albums of the year and likely the decade; it will also go down in history as a masterpiece in its genre and everyone should own it.

1 Response to 250 Word Album Review: Queens of the Stone Age – … Like Clockwork