Posted on December 9, 2013 by VocalsOnTop 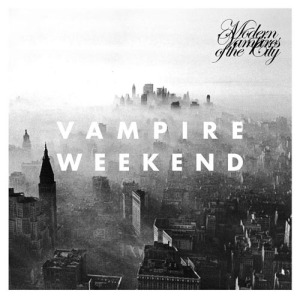 Vampire Weekend’s third record delivers no surprises. This is not to say it isn’t good, because it is. They are holding steady with what they have done in the past, they aren’t shaking foundations or moving in dangerous, uncharted directions. This is a catch-22 because they aren’t really getting any better but they aren’t alienating their fanbase either.

Their first record really made a lot of waves and gained them the same stardom they enjoy today. They chose to remain a solid band instead of getting overly ambitious and losing their current group of fans the way The Strokes did over the past decade. With songs like “Unbelievers” it is hard not to like what Vamprie Weekend is doing; it is fun and enjoyable. Modern Vampires of the City hits a peak with the cleaver wordplay of “Diane Young” that sees the band get wild and hit their maximum level of all out fun. Other songs like “Finger Back” are the same strange, intoxicating type songs that made everyone fall in love with this band in the first place. The song possesses a strange spoken word part that give the song just enough of a break to keep the tempo from growing old; showing this band really does know what they are doing.

The album suffers a couple lulls as did the group’s last record Contra but overall it holds strong enough not to make you lose interest. It is not a great album but it is worth listening to, it should put you in a good mood and remind you why you fell in love with this exuberant group in the first place.