Danny R. Phillips is a professional music writer for many websites and publications including Blurt Magazine and we are proud to have him as an occasional contributor to Vocals On Top. His year end lists are always good ones to watch as he has been deeply involved in the music scene for several years now. He is not only a valued contributor here but is also a valued opinion and friend. Go give his “Don’t Have A Clue podcast a like on facebook here: https://www.facebook.com/pages/Dont-Have-a-Clue-Podcast/142802442561329?fref=ts Here is his best of 2013 list:

First, I would like to thank my good friend Clint Wiederholt, head music snob at Vocals on Top, for inviting me to write this list and for making me feel like my opinions on music and music related things matter, at least for as long as it takes me to compile said list.  Well, enough of all the happy horseshit.  Here it is.

Favorite album of the Year:

“Get on With It”- Black on Black

“The Consequence of Trying”- Many Moods of Dad

“No Other Animal”- Matthew Coman

“…You Asked for It”- Missouri Homegrown

“My Shame is True”- Alkaline Trio

Grooviest Tune of the Year:

“Last Splash” era Breeders (only because they didn’t come within 200 miles of Kansas City), Black Flag (because the new song sucks)

“Nothing Can Hurt Me: The Story of Big Star”

Best concerts of the Year:

Strange yet awesome performances of the Year:

Coolest Things that have happened to Me this Year:

Getting the confirmation that my article on Grant Hart for BLURT Magazine will be included in a book, “Best Rock Writing of 2013”; running into and talking with Bob Mould in the lobby of the Lawrence Marriott.  A total surprise.

Worst Things that have happened to Me this Year:

Being sick for what seems like 9 out of 12 months, cancelling my trip to cover Riotfest in Chicago (no Replacements, no The Cure…), Lou Reed dying, The St. Louis Cardinals losing the World Series. 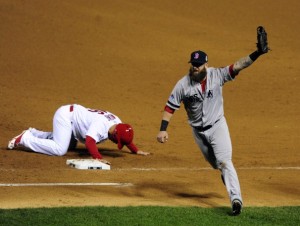 Kolten Wong of the Cardinals gets picked off first base to end game 4 of the 2013 World Series.