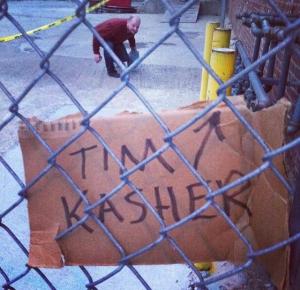 Tim Kasher show directions sign outside of the warehouse where the show would take place inside of an off-season haunted house in Kansas City, MO on 3/22/14.

A living room show is a bit of a scary premise, but you never could have envisioned it being scary like the Tim Kasher living room show in Kansas City on March 22nd. The five story climb up stairs at a warehouse in the West Bottoms of Kansas City would end with me and about 60 others standing in a haunted house in March. It actually made for a killer (no pun intended) venue for concert.

Tim Kasher is a solo artist but is much more notably the lead singer and writer for the bands Cursive and The Good Life. His songwriting is unique and his voice is even more distinct. This small living room tour for his second full length solo record Adult Film finds him playing songs from all his bands in a stripped down, rootsy form. This show at a haunted house will undoubtedly be one that will stick out in his mind for years and with the show he put on it will be memorable for the attendees as well.

Kasher sould play behind two giant silver hands extending from the ceiling while he would hit his two solo records the most, accounting for about half his set as most of The Good Life and Cursive songs are very band oriented and too loud to pull of acoustic. He and his one band mate for the tour, Patrick Newberry, would do their best to tackle the songs. Kasher would start with “No Fireworks” off of his first solo record The Game of Monogamy and would continue with similar down tempo tunes for much of his roughly hour and a half set. He would dig deep for one of the faster songs of the night with “Rabbit, Run” before going into one of the highlights of the show with The Good Life’s song “Keely Aimee” with it gentle acoustic splendor. He would also take on “The Recluse” off of Cursive’s The Ugly Organ to the massive delight of everyone in attendance.

One of his most ambitious attempts to transition a song to a bare form was tackling Cursive’s “Radiator Hums” and the great “From The Hips” back to back. What truly shone was his solo material however. The solo songs were closer to their truer form whether it was delicate songs like “Where’s Your Heart Lie,” the puppy love song “Strays” or the slow burning Good Life song “Notes in His Pocket.” The upbeat solo tune “Cold Love” woudl even find Kasher playing drums and being enthusiastic about his performance behind the kit.

He would play his planned 16 song set before tackling a couple requests which turned out to be heavy on The Good Life side of things. He mentioned he planned 20 songs so it would be $1 per song, just like iTunes. The lengthy “Inmates” didn’t fail to impress as a request before Kasher closed with the widely yelled “Album of the Year” off The Good Life’s album of the same name. 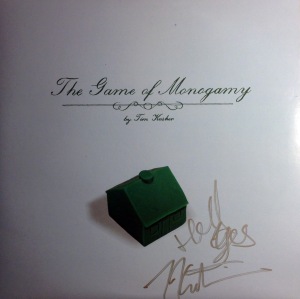 An autographed copy of the solo debut from Tim Kasher “The Game of Monogamy” on vinyl obtained at the living room show in Kansas City, MO.