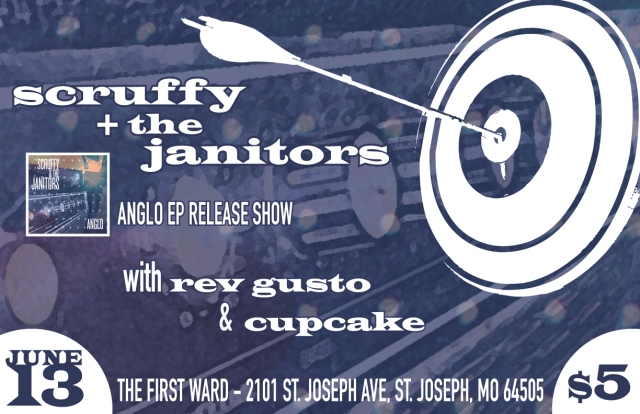 WHAT TO EXPECT?  New music from St. Joe’s hottest band Scruffy & The Janitors…

Scruffy & The Janitors is not only the hottest band in St. Joseph right now but are one of the warmest in the Kansas City scene too. With a huge spike in exposure with the release of their “Dirtleg” music video and the recent success of their sing “Shake It Off” the are getting a lot of traction. They are coming up on their first show at The Midland Theater soon and will be headed to Canada soon. The “Anglo” EP is ready to be released with 4 songs on it including “Dirtleg” and “Shake It Off” which have both have a fair amount of airplay on Kansas City’s 96.5 The Buzz.

Rev Gusto is a Kansas City export that has a softer approach than Scruffy. Their power pop songs take from all the usual suspects like Big Star and Nada Surf carrying the torch of the genre with a nice clean sound.

Cupcake is a band that sound like not many other bands. If you haven’t seen them, you should. Get there early to catch their set.