Posted on November 3, 2014 by VocalsOnTop 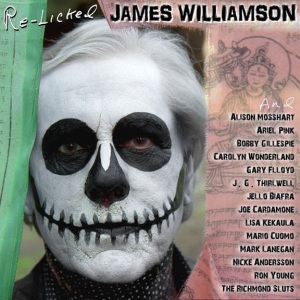 James Williamson was in The Stooges and he will always be linked to them. He embraces that (and uses it) on his “solo” album Re-Licked. The album is exactly what it sounds like, Williamson going through the Stooges vaults and re-recording songs.

He uses a twist as he has several high profile guests help him out like Jello Biafra, Alison Mossheard and Mark Lanegan along with a laundry list of other lended talent. One good thing is there is no deception here; he presents them as re-recorded songs and even gives his guest artists prominent billing on the album cover. Williamson isn’t fooling anyone here and he doesn’t want to. The other good part is that the music isn’t too bad either. They aren’t stale rundowns, they have fire and passion like you’d find on a good cover album.

The sound undeniably belongs to The Stooges so the album works even with an array of vocalists. Most singers just try on their best Iggy Pop mask and that isn’t a horrible thing because it helps tie the record together. It’s great to hear Jello Biafra belt out “Head On The Curve” and fall somewhere between The Dead Kennedys and The Stooges. Mark Lanegan and Alison Mossheart duel on “Wild Love” nicely for one of the albums most distinct tracks as well. The record is interesting for a listen but even with Williamson’s presence doesn’t feel quite like The Stooges; it feels more like a tribute album.

Key Tracks: “Head On The Curve” (with Jello Biafra) “Wild Love” (with Lanegan and Mosshart) “Sick of You” (with Mario Cuomo of The Orwells)