The Vinyl Court: Rock and Rollin’ with Fats Domino 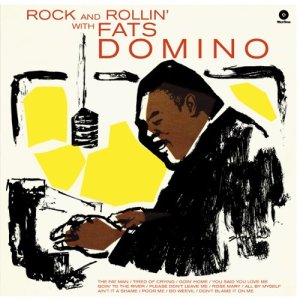 Every once in a while a stack of yard sale vinyl yields more than Glen Miller and Herp Alpert albums. Finding quality records at sales in increasingly more difficult by the day because of the rise in popularity of the format. This inevitably has led to a false sense of value put on scratched albums and old country records. You can still find a pile of reasonably priced records that are worth spinning on occasion if you look hard enough.

At two for $1 these records were cheap enough to experiment a bit. This led to me taking home records by Dave Brubeck, Nat King Cole and Frank Sinatra, not exactly a normal haul. The LPs I was more excited to get on my turntable were Frank Zappa, a huge Warren Zevon score and Fats Domino. “Rock and Rollin’ with Fats Domino” was released in 1956 originally and has some of his more well known songs like “Boll Weevil” and “Ain’t That A Shame.” The early R&B piano style of Domino fills the nearly 30 minutes of the album and shows a time when rock and roll was still new and exciting.

Domino’s voice is as full as you’ll hear, “The Fat Man” as he is lovingly dubbed, belts confidently while guitars, drums and an array of horns back him up. It’s embodies Chuck Berry’s strut while also having a New Orleans swing sound. Extensive listening can be a dangerous thing with this type of music. A lot of it sounds similar and it can wear thin if you aren’t careful with your portions. It will occasionally hit the spot though and this record is a great listen, just don’t overdose on it.