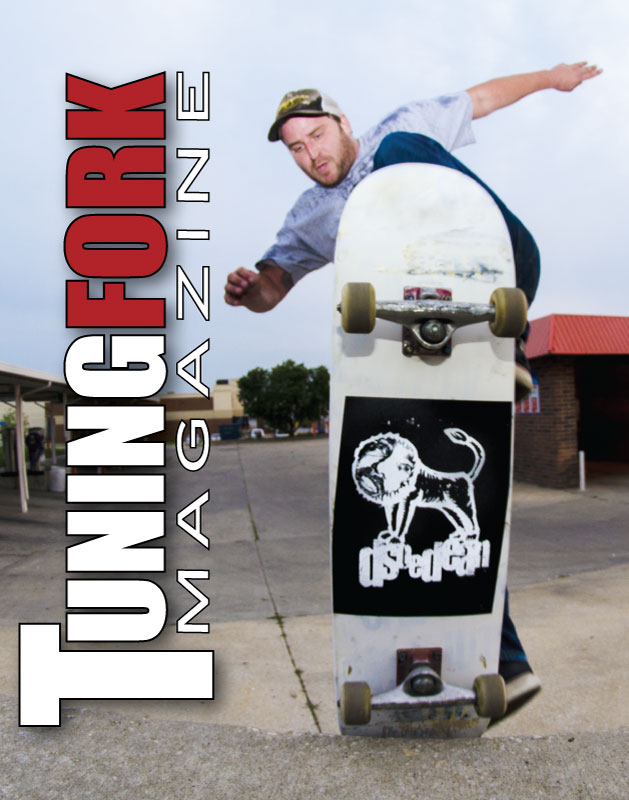 Zale Bledsoe may be the person most featured in Tuning Fork magazine since our first issue back in July of 2013. This is with good reason as he thrives within the St. Joseph music scene and continues to move toward new goals. He graced the beautifully shot cover for Tuning Fork Magazine in September 2013 for our third issue. The guest photographer was a specialist in skating photography, Mitch Stroup. Mitch captured Zale with his Dsoedean skateboard on the photo as you can see and only Mitch, Zale and I can attest, but he landed the trick.

Bledsoe’s latest endeavors still involve the same things he was doing back then; Dsoedean, skating and his solo project For The Sound. His rock band Dsoedean with bassist Cody Hudson and drummer Bobby Floyd is gearing to record a new album in the coming year and have plans to release their second 7-inch vinyl single on record store day (April 18th.) The 7-inch will feature the songs “Body of Water,” which is available digitally now, with the flip side being the song “Rocketeer.” He has even hinted that there will be a small amount of these that will be available in a limited edition packaging bundle.

For The Sound is also an active project as Bledsoe is in the midst of recording the first full-length release under that moniker. He has recorded numerous EPs using lo-fi recording methods. These recordings were traditionally solo acoustic and many times live in the studio but he is now adding more instrumentation. “It’s a different feeling to put drums, bass, lead guitars and different guitar parts on those songs.” Bledsoe says “It’s given some older stuff a little bit of life and made it more listenable.” In addition to re-recording some old For The Sound songs that have been around for several years, many of them pre-dating Dsoedean, there will be new songs on the album as well making for what Bledsoe helps is an elevated listening experience.

Bledsoe’s other hobbies have gained some major attention recently as well. He is a craftsman and recently started toying with making guitars. He incorporates his past in these as he is making them out of old skateboard decks. This gives the guitars unique color schemes that flow naturally. The intense colors from the decks show through and the guitar bodies that he is crafting make them completely unique sounding. He recently raffled one off for the This Tall Records Christmas show and Austin Marks of the bands Eyelit and Dreamgirl won it. “The response from Austin and from the raffle we did showed me people dig them and as long as I can make them good it is probably something I should get out there.” Bledsoe is currently making four guitars to bring his total number of hand made guitars into double digits and continues to fine-tune them, trying to make each one better than the last. “I’m donating one to the Midwest Music Foundation for a fundraiser for Midcoast Takeover that helps area bands get down to Austin, Texas so they can showcase music from the Kansas City area.” Bledsoe explains, “Then I’m donating one to the Folk Alliance to help them raise money.”

Each of his guitars has a sound and personality of its own along with one of a kind colors. Bledsoe has his favorites among the ones he has made as well, he has one guitar that he uses at live shows now and he is even using it to record the new For The Sound album. The distinct sound of the guitar he hand made is making this record truly be distinct and one of a kind itself.