The Vinyl Corner: Possessed By Paul James – Live at Antone’s 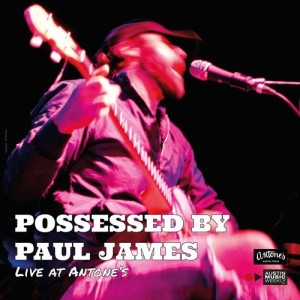 Possessed By Paul James is in fact the one-man-band Konrad Wert. He plays acoustic guitar, banjo and electric fiddle while singing. He is a school teacher from Texas who has a surprisingly lively moonlighting gig. His energy makes him a distinct act as you can easily see how the “possessed” part of his name comes into play shortly into his live set.

His performances are instantly stunning and it makes sense that the energy he puts into his shows might not relate perfectly to a studio record. This 6 song EP was recorded live to try to capture the “possession.” You get to hear his interesting banter between songs and you can feel the looseness of his set as well. He goes raw on “Feed The Family” and goes to town with his electric fiddle on “Fiddle Jig.” His songs all remain interesting based on his energy level alone. You can feel the crude sound of his blunt stomps that seem raw and dirty; just the way they would live.

He was giving this 10-inch record away to any interested takers at the Folk Alliance International music fair showing his willingness to just want to spread his music. The limited edition record of 500 on black 10-inch vinyl is definitely and interesting slab to have. Numbered records always have an exclusive feel to them; this led largely to the massive scramble that is now record store day. The limited quantity here is more just to focus on getting a vinyl sampler of his live show to fans. While it is still difficult to capture the live magic of Possessed By Paul James on any audio recording, this is likely about as close as you will come.