250 Word Album Review: Lucero – All A Man Should Do 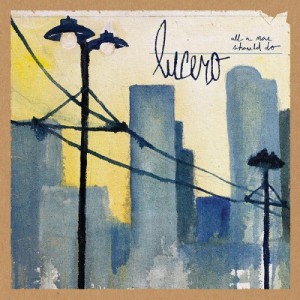 Lucero doesn’t rock out too much on their new record. It’s predominantly slow and as piano player Rick Steff steps into the spotlight behind lead singer Ben Nichols, lead guitarist Brian Venable steps back from it. This makes the album slow and reflective, seemingly avoiding the rash decisions that make up much of Lucero’s song catalog. Ben Nichols’ lyrics carry the weight though and this record is still every bit as intriguing as any other release by the band.

On the opening “Baby Don’t You Want Me” Nichols is already pining for a lost love in what can be called a  microcosm of Lucero’s career. “Can’t You Hear Them Howl?” is the most rocking of anything on the record as the howling is done by the horn section. The song echoes the Stones’ “Gimme Shelter” in your head with the same kind of strong driving push by the horns. “Went Looking For Warren Zevon’s Los Angeles” is one of the best song titles you will hear this year, it is also a very good song. Like most on this record it is a relaxed tune that finds Nichols stealing the spotlight with his great lyrics. On “They Called Her Killer” Nichols weaves a tale of the girl all guys have had that is brutal and you can tell by the vivid lyrics Nichols has a specific girl in mind.

This record isn’t the rocker many people wanted but Lucero still have added to their lofty alt-country legacy. Look for this record and its great album art in my top 10 albums of 2015 list in December.

1 Response to 250 Word Album Review: Lucero – All A Man Should Do