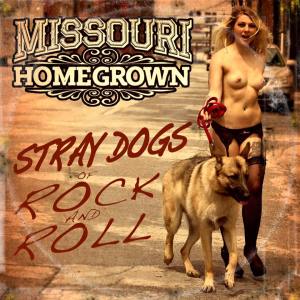 Missouri Homegrown’s first studio album is the most rock and roll album you will ever hear come out of St. Joseph. Sure it follows all rock and roll stereotypes but it is supposed to. It is pompous, snarky and crude and it is all the better for it.

The anthem “High In Missouri” will have you singing along whether you like it or not and “Stray Dogs” is the down tempo swan song that proves this band is better than the rest. “Stray Dogs” is the relaxed tempo breaker that builds from a piano beginning to a rocking end that this proves the legitimacy of Missouri Homegrown. The music on “Baby Mercury” sounds like two cats fighting their way out of a burlap sack while in contrast the lyrics flow perfectly telling an all too familiar tale. The song may not stand out at first listen to the record but in many ways is the jewel here. “Wagon Wheel Motel” captures a mood few bands can, it is desperate and weak all the while being just creepy enough for you to know there is more to the story than the words say. “Another Way To Kick” is a balls out Tom Petty-style rocker and “Hey All You Rock and Rollers” is about as 70s anthem as it gets.

This first studio recording for the band cashes in on all the checks the band has written over the last few years. It is exactly what they promised they could do.