The Vinyl Corner: The Very Best of The Everly Brothers 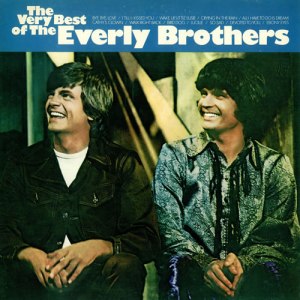 The Everly Brothers are one of those bands that you probably know their songs, even if you think you don’t. There’s a chance you might not equate the songs with the band but you’ve likely heard “Bye Bye Love” “Cathy’s Clown” and “Wake Up Little Susie.” You might think 6 years after your debut record isn’t enough time to amass a “best of” record but things moved much faster in the 60s it seems. The Everly Brothers put out around 8 albums in that short span, production you simply don’t see in modern music. The result was also staggering with 5 songs reaching the top 2 spots on the US charts before the 1960 even began.

Don and Phil Everly were obviously heavily influence by Buddy Holly and combined his jangly rockabilly sound with their superior harmonies to string together radio gold. If you are a true traditionalist and Everly fan you might not like this collection because 6 songs are re-recorded because record labels are assholes. If you are a big Everly fan you don’t need to be buying a “best of” collection of theirs anyway so that doesn’t matter much.

I’ve been scouring the stacks for a cheap Everly Brother hits collection for a few months now and grabbed this one for a couple dollars. It was in great condition (it’s a repress, likely from the 80s) and the jacket was in as good of shape as the record was. It was an easy buy at $2 and a good addition to the collection.