Concert Review: Lucero / The Architects at The Granada in Lawrence, KS 9/13/16

Weekday shows can be tough, especially if you live out of town. When two bands you like hook up for a show you’ve got to answer the call though. Not even the inability to see the center line of the road through the pounding rain damped the spirits of the show. It was The Granada’s birthday after all. Tickets could be netted for a very practical $5 to see Lucero and The Architects on a Tuesday night yet the venue would still only be about 3/4 full.

The Architects and Lucero don’t have a ton in common stylistically, the pairing must have been based on Lucero loving The Granada (and Lawrence) and The Architects being local favorites made sense for the venue. 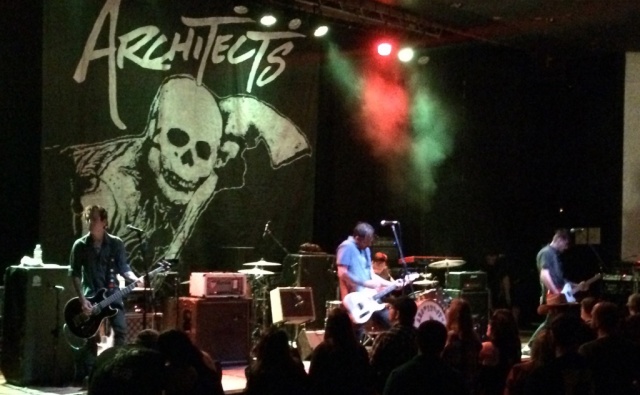 The Architects with another high intensity show at The Granda in Lawrence, KS on 9/13/16.

Taking the stage at 8:00 The Architects played to a light crowd that acted far more interested in Lucero than the band on stage. The Kansas City punkers brought their A-game though, as they always do. They pounded through several songs from their very good comic book/CD EP series Border Wars where they have finely rode the line between punk intensity and pop hooks. The soaring choruses of “Kickswaggerboom” and “Lucky” are undeniable to crowds. They dug out songs from each of their records with the standards; “Pills” and “Daddy Wore Black” in addition to a surprising reveal of “Bury My Heart In Lebanon, MO.”

As distinct as their stage show is the sweaty lead singer Brandon Phillips always committing to the show and ending up dripping wet by the end of the set. A little fun is never far away from the band as the three brothers (Adam, Brandon and Zach Phillips) howled like wolves while guitarist Christopher Meck tuned. They pounded out a riff heavy “Death Rides a Horse” before indulging in their AC/DC cover “Sin City” then ending with “Peter Fonda.” Their set would show them at their best, loud and proud.

The Architects setlist from The Granada in Lawrence, KS 9/13/16:

Then Lucero came on stage, lacking the two horn players present last time they played The Granada. Now a standard 5-piece band led by salt and pepper haired Ben Nichols and featuring more heavily with each passing show keyboardist Rick Steff. Lucero instantly bucked the tone set by The Architects by playing the slow burning “Went Looking For Warren Zevon’s Los Angeles” with Nichols strumming his acoustic guitar. They would then set the tone for the rest of the night by honoring an audience request by playing the song “When You Decided to Leave” off their album That Much Further West.

The theme of the night would be requests, Nichols and the band are fearless when it comes to requests. They aren’t afraid to attack any songs from their entire catalog dating back to their self-titled debut from 2001. They would hit a few of their career highlights like the brilliant “Texas & Tennessee” and “Tears Don’t Matter Much” along with concert favorites like the sing-along “Nights Like These” and “The War.”

Lucero guiding their way through another impromptu set at The Granda in Lawrence, KS on 9/13/16.

The group is always very loose and play off one-anther, it’s easy to see why no two Lucero shows are ever the same. They don’t have a setlist and undoubtedly are open to impromptu songs. The musicianship to be able to hold together on songs they haven’t even practiced in months and maybe years is staggering. The high volume of requests does have its draw backs though, you end up with several obscure songs that many audience members might not know. Going into a show you definitely don’t expect to hear “Nineteen Seventy Nine” “When You Decided to Leave” and “Last Night In Town” but it is all part of the Lucero experience.

Only playing 3 songs off of their excellent new record All A Man Should Do was a shocking turn. Even among those, absent was their latest triumph of a song “Baby Don’t You Want Me.” Nichols and the band likely don’t think much about that on stage, they aren’t pushing any particular record most times, they are just trying to appease a hungry audience one person at a time. Nichols, adorning his standard plain white tee, is one of the best at connecting with many audience members one-on-one. Regularly gazing into the crowd making those connections. By this time the lead singer had respectfully accepted all the loving audience’s free drinks and was feeling the effect. Lucero would end with a rowdy version of “Drink Til We’re Gone” and a standardly somber “Fistfull of Tears” before returning for a one song encore. They ended the show as they started with a slow songs from their mostly slow new record. They pulled out “My Girl & Me in ’93” which is not a great example of how good of lyricist Nichols actually is. Then as always he lifted his glass to the crowd and turned his attention to doing the same thing in Colorado the next night.