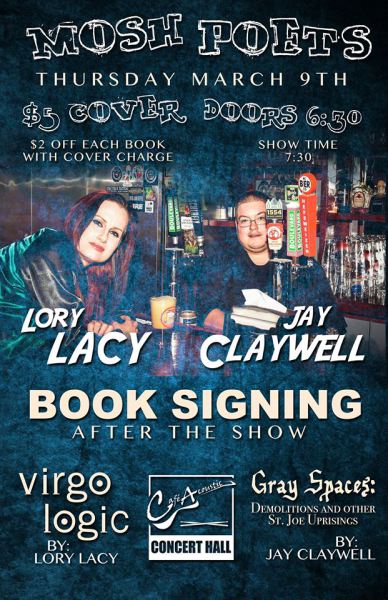 Author’s note: I wrote this while listening to the MC5

I first met the poet Jay Claywell within the confines of what would become our adopted home base, Paper Moone Books. He was an angry young man, in those early days, with an affinity for Henry Rollins, Hubert Selby, Jr. and the patron saint of angry drunks, Charles Bukowski.

My weapons of choice in those days were Kerouac, black coffee and punk rock. That still rings true to some degree but I have given up poetry for the critic’s squinting eye, while Jay’s approach and practice of poetry has only grown stronger, resolute, and clearer. Journaling at least 250 words a day, every day since his teens, Jay has taken something he enjoyed and turned it into something he must do to survive, a joyful, addictive habit, passing the time in ingenious ways. Getting at the marrow of life, throwing life in your face, showing the perfection and iniquity of men. Jay’s poetry is now and allows has been in your face, fiercely introspective and above all else, nothing but the truth.

Born with Cerebral Palsy (as was I), Jay seems to survive or thrive creatively on the frustration given by CP, taking the limitations of body and expanding his mind, pooling with the colossal stupidity that runs the world today. Nothing is off limits to Claywell as he releases the pressure of his time. In doing so he has managed to create some of the finest poetry I have read anywhere; using his mind and the view of a world that has lost itself. Never afraid, Claywell steps back and takes a good, long hard look at what we have before us and tells all who will listen how he sees it. Jay looks at the world with eyes wide open; seeing everything, all the beauty, all the slime, all the honesty and treachery, wading through the muck, crutches in hand, challenging life to a debate.

I’ve only just met Lory Lacy but her reputation preceded her. Lacy’s deep history in music, along with an impressive vocabulary, made for an interesting and lively conversation. The lead singer of The Royal Absinthe Company says she has nearly seen everything, the joy and absurdity of it all. “I was on The Gong Show once, playing a piccolo in a bikini. California is weird.” Lory’s style and use of a mammoth knowledge of the English language, spreads her all over the musical and literary maps. Taking inspiration from Wagner or Led Zeppelin, opera to heavy metal, arias or “Over the Hills and Far Away,” her words are nearly psychedelic in scope, bees and envy intertwine, strong, vulnerable, spaced out and on the groove. Lacy’s love of the word, the song, every note, every phrase makes for a formative linguistic adversary; goddamn, she would be a great partner in Scrabble.

These two wonderful writers have decided to join forces for “Mosh Poets” at the Café Acoustic Concert Hall located inside the historic D&G (1918 Frederick). It will be a night to empty their souls through words and music, in the process giving something to St. Joseph, unique in its delivery and voice. “We met at the Café Pony Espresso readings I believe,” says Claywell, the host of the monthly Thunderbird Sessions at Unplugged, “Sometimes Lory will get on a roll, really go into outer space and that just knocks me out. It’s just phenomenal.”

“My idea for this is to take my rock and classical backgrounds and use them as a way to deliver my poetry,” said Lacy with a shy look. “I really just want to talk to people and see the impact the poetry has on people whether it be positive or negative; I think we should do things like this, keep taking shots until people have no choice but the say, Hey, there’s something going on here.” Claywell expanded, “I want people to know that there are good writers here, there is a good scene here. I absolutely want to see it grow, for people to join in and use their words to create something impactful, something solid and real.”

Feeding this scene are The Thunderbird Sessions at Unplugged and The First Saturdays Readings at Café Pony Espresso. “Those two groups, those two scenes are cross-pollinating. Going into either one of those readings, you can almost tell who wants to be there and who NEEDS to be there.” While Lacy and Claywell are both lovers of the written word, warriors in the artistic world, kings in the battle to try something different, in one way, they diverge: “Lory likes to watch people, to report on what she sees,” Claywell says, “I just want them to get the hell out of the way.”

Join Jay Claywell and Lory Lacy aka The Mosh Poets

This is also a book signing for Lacy’s “Virgo Logic,” and Claywell’s “Grey Spaces: Demolitions and Other St. Joe Uprisings”