250 word album review: Hurray For The Riff Raff – The Navigator 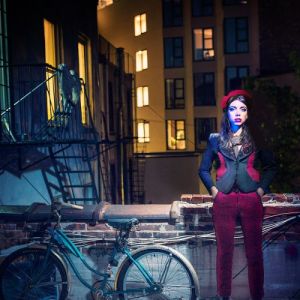 Hurray For The Riff Raff gained a ton of attention with the album “Small Town Heroes” in 2014 and now they (she) is taking a shot at an even larger audience. On “The Navigator” the sound is clean and more produced making it a bit harder to classify it as simply folk music.

There are great songs here like “Living In The City” with its Bob Dylan style layout which is the strongest song here. On “Hungry Ghost” there is more drive and a much bigger sound, in a better world where shitty music didn’t dominate the charts this would be a pop hit. On “Rican Beach” things get experimental with a primitive yet expansive sound on the protest song. Songs like this really help tie an album together as it shows the same tunes weren’t just rehashed a dozen or so times. On “Pa’lante” there is no hiding the love for John Lennon, it’s so blunt that it’s obvious there was no attempt to hide it and the song is stronger because of that transparency. On “Nothing’s Gonna Change That Girl” there is a much softer approach and you see a rare spot of vulnerably from Hurray For The Riff Raff. You also get to hear the unashamed sweet vocals on the track featured up front making it for an album highlight.

This album is everything a fan of the band can hope for and for listeners just getting into Hurray For The Riff Raff it is a perfect place to start.

This entry was posted in 250 word album reviews, Uncategorized and tagged 2017, 4 Stars, album review, albums of the year, Alynda Lee Segarra, Hurray For The Riff Raff, record, review, The Navigator. Bookmark the permalink.