The Vinyl Court: Queens of the Stone Age – Villains 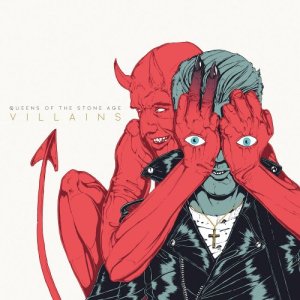 It’s hard to beat Queens of the Stone Age at this point. They are hard rock enough to satisfy the urge to headbang and catchy enough for radio. Their new record “Villains” comes a lengthy 4 years after their last great effort “Like Clockwork” and looks to be just as strong. It is a different album stylistically (thanks to the efforts of producer extraordinaire Mark Ronson) but still has the feeling of a special album just like their last release.

It’s a dance rock record and there is no denying it. It will make you move and that is exactly what Josh Homme and company intended. The opening “Feet Don’t Fail Me” is a raucous rave-up and “The Way You Used To Do” is simply irresistible with it’s great hooks and bouncy guitar riff. “The Evil Has Landed” is a monster late in the record with it’s crunching guitar intro that sounds like it is straight out of the Led Zeppelin songbook.

The vinyl had a deluxe version but the lofty price tag made me opt for the more affordable double vinyl version. Still, it has 3 sides studio of great new Queens songs and a pretty cool etching on the 4th side. The matte vinyl jacket is always a good choice in my book and the cover is pretty killer artwork-wise as well. Overall this was a great addition to the collection.

Verdict: Get it, if you like dance rock this is probably essential. Queens is likely the best hard rock band active right now; enjoy it while they are making music.

This entry was posted in The Vinyl Court and tagged Josh Homme, Mark Ronson, QOTSA, Queens of the Stone Age, The Vinyl Court, Villains, vinyl. Bookmark the permalink.