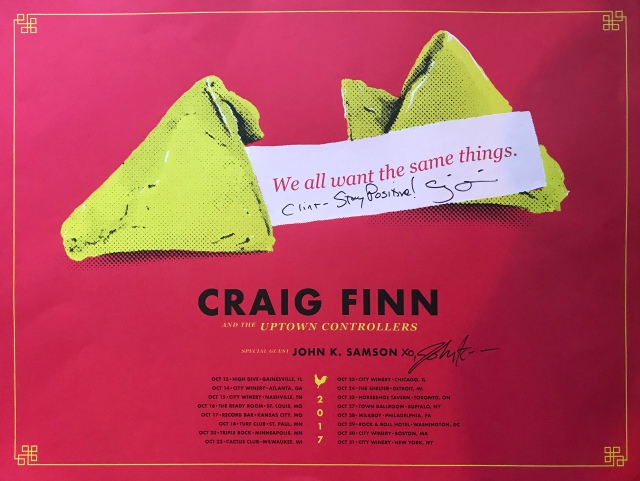 Signed Craig Finn and John K. Samson tour poster for the “We all want the same things” tour in 2017.

Seeing Craig Finn jolt to the side and point up in the air to emphasize his point is nothing unusual. His hand gestures are immediately noticeable and to be honest a little abrasive at first. The normally calm Finn may appear collected off stage and in interviews but he puts on his performer cap when he takes the stage. He becomes a commanding and gravitating figure that has the ability to lock the crowd into the show and keep them on edge. At the Record Bar in Kanas City on October 17th he proved this to a moderate Tuesday night crowd and gave them a classic performance.

First his tour-mate John K. Samson would take the stage. He was the lead singer and songwriter of the popular indie band The Weakerthans. Now, like Craig Finn of The Hold Steady, he is off touring on his own. He would take the stage by himself, armed with nothing but his electric guitar and remain that way for his whole set. He would split the next 40 minutes pretty evenly between songs from his two solo records and his catalog with his former band. Bearded onlookers formed a half moon around the stage keeping their hands in their pockets if they weren’t holding their favorite IPA. It wasn’t a big sing-along with Samson and his very distinct voice but the casual observer could see many people lip-syncing along with the songs, especially the selections from The Weakerthans. 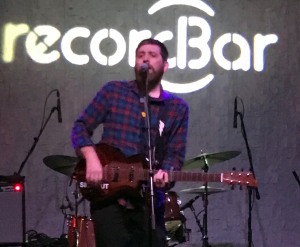 Samson would work his way through his past by way of song hitting intellectually themed topics many times like on “Pamphleteer” and “When I Write My Master’s Thesis.” The latter being one of the more rocking numbers from his set and probably providing the most tasty hook of a chorus in the night. He would work through the Virtue the cat trilogy of songs concluding with the latest of the three, “Virtue at Rest” before moving on to the title track from his latest solo record, “Winter Wheat.” He would then close with the crowd favorite “The Reasons,” the self-deprecating song was truly the perfect set closer.

Craig Finn quietly tuned up his guitar, taking advantage of the intimacy of The Record Bar before leaving the stage so he could arrive with his full four-piece band at once. He nodded at his keyboardist to start the opening keys of a shiver-inspiring “God In Chicago.” The quiet, nearly spoken word song was an incredibly bold choice to start a set because any crowd noise could drown out the delicate number. When his backing group, The Uptown Controllers, launched into “Apollo Bay” Finn’s demeanor would change as he gave darting looks, pointing and using hand gestures while happily shredding away on his electric guitar that was just a little louder in the mix than all the other instruments.

The night would find him hitting his new album “We All Want The Same Things” extremely hard, playing seven songs from it. It was appropriate, it was the name of the tour. He would push the theme of all of the songs being about two people in one way or another; some were in love, some were out of love and others were just sharing the song with one another by chance. The other underlying theme Finn would state is one of his monikers, be honest. He would point this out before easing into the song “Be Honest” but the theme would continue to carry until the set’s end.

When Finn let The Uptown Controllers take a small break he grabbed his acoustic guitar and took full advantage of the quiet, patient crowd once again. He would play “Tangletown” about avoiding loneliness and “Dudes From St. Paul” about fear of the unknown.  The highlight of the entire night would fall in between with the gut-wrenching “Dennis & Billy” about two friends taking different life paths and not getting exactly what they bargained for. He introduced it as a sad song and did it ever deliver, the crowd silently took in every word and got lost in the story.

The Uptown Controllers would return to play a thunderous “Newmyer’s Roof” and with the help of John K. Samson, “Birds Trapped In The Airport.” The evening would end with Samson and Finn dueting on the great Gillian Welch song “Wrecking Ball” that really seemed to sum up the show as the powerful evening that it turned out to be.