250 word album review: Toadies – The Lower Side of Uptown

Posted on November 8, 2017 by VocalsOnTop 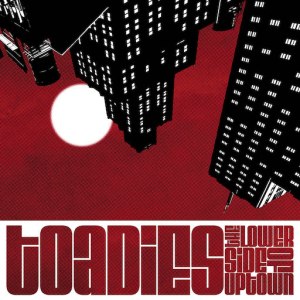 The Toadies don’t break any ground with their new album “The Lower Side of Uptown” but they definitely are in a place in their career where they really don’t need to either. They still rely on heavy guitar hooks tearing through your speakers and Vaden Todd Lewis’ growly vocals to float their songs.

Starting the record off with the crunchy riffs possessed by “When I Die” and “Take Me Alive” is the most Toadies thing the Toadies could do. “Polly Jean” roars and rips as one of the strongest songs here. Even on a love song the band finds a way to keep things jagged, “You Know The Words” sounds very little like a love song unless you pay attention before the simple refrain of “I. Love. You.” The album doesn’t roar all the way through though, “Amen” is a serviceable change up of the pace but on the band’s lead single from the record things go awry. “Broke Down Stupid” not only shouldn’t have been the band’s single here but it is likely the worst song on a pretty good record. The following cover of “I Put A Spell On You” (the band’s second single) is equally as meh-worthy. Not that the Screamin’ Jay Hawkins cover of “Spell” is bad in any way, it just begs the question “Why?”

The first half of the uneven album is very strong, the second half is average but like all Toadies material still possesses strong moments. It’s still a strong effort for a band a couple decades into their career, it’s still the same old Toadies but it’d be far more disappointing if they WEREN’T the same old Toadies.