Concert Review: Pedro The Lion and Marie/Lepanto at The Record Bar in Kansas City, MO 2/9/18

Pedro The Lion means business. The David Bazan led project was brought out of hiatus unsurprisingly but the outlook of the band is not so much as expected. The band has a whole new ambition it seems. The power trio is just starting their first of three major tour legs in 2018 and at just their second show of the tour lead singer/brainchild David Bazan told a packed Kansas City crowd that his future music will come under the Pedro The Lion moniker for the foreseeable future.

The start of the tour is a fresh start for the band who has released an album since 2004’s “Achillis’ Heel” and also a fresh start for a couple old friends in the opening band, Marie/Lepanto. The geographically named Marie/Lepanto (after a couple towns in Arkansas) is spearheaded by veteran singer/songwriters Justin Peter Kinkel-Schuster and Will Johnson. Johnson has been a part of a long list of bands including but not limited to Centro matic, Overseas, Monsters of Folk and South San Gabriel in addition to a successful solo career and Schuster has solo material as well as recordings with his band Water Liars. Friday, February 9th at The Record Bar would be just the second ever Marie/Lepanto show. 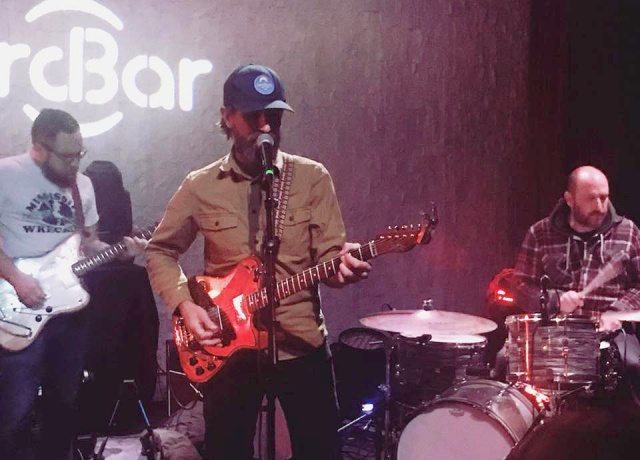 Marie/Lepanto (Justin Peter Kinkel-Schuster [left] and Will Johnson) play their lead single from their new album “Tenkiller” with Pedro The Lion’s David Bazan on drums live at The Record Bar in Kansas City, Missouri on February 9th, 2018.

Their great debut album, “Tenkiller” is a largely quiet, acoustic affair; this show was not. The duo chose to each forgo the acoustic element and each play electric guitars and make some noise. The dynamic payed off as the soft singing by the two who would split the 8 songs on this night was only intensified by being amped up.

Even Johnson’s largely quiet “Patient, Patient Man” would have some hairy guitar feedback as would his dark family tale “Famished Raven.” Schuster would show off his vocal prowess on the catchy “Simple Scenes” and the show closer “Tenkiller” while Johnson provided backing vocals. Even Mr. Pedro The Lion, David Bazan, would join in on drums for a couple songs. The drums adorned the most rocking song by the band, “Inverness” which was ironically slowed a bit from the studio version live. The bar would already be filling up fast during their early set and they proved to be a great opening act for the returning headliner.

Marie/Lepanto setlist from The Record Bar in Kansas City, MO on 2/9/18:

Pedro The Lion came out with a vendetta it seemed, rocking harder than ever. A solid lighting setup for such a small venue adorned the power 90 minute set. The opening song “Slow and Steady Winds The Race” was an ironic start with the ferocity in which Pedro would attack the stage. Between most songs the band wouldn’t even come to a halt before blasting into their next song, in all covering 20 songs from the Pedro and Bazan catalog. The group was in top form with Bazan handling lead vocals and playing bass flanked by Sean Lane on drums and Erik Walters on guitar.

Pedro The Lion performs live to a packed crowd at The Record Bar in Kansas City, Missouri on February 9th, 2018.

The show was surprisingly well balanced from the group’s catalog instead of hitting “Control” extremely heavy as Bazan has done solo in the past. Some of the band’s strongest material is undoubtedly from that record though. The band pounded through “Magazine” “Options” and “Second Best” (among others) from that record providing many of the highlights of the set. Other highlights were a rousing take on “Keep Swinging” and a few unexpected songs like “Nothing” from 1997s “Whole EP.” Again the band just punished through the setlist, rarely slowing to a jog. A couple short intros would be present and as Bazan is customary to doing he hosted a small Q&A from stage at one point.

A couple solo Bazan songs snuck onto the setlist as well. The loyal followers of Pedro still knew every word and crowded to the front to try to get a consistent visual on the band. “Kept Secrets” was great to hear by a rock band instead of the electronic approach that plagued the studio version and “How I Remember” had as much crunch as any song of the night. The encore included the quirky “Big Trucks” and a good closer choice of “Bands With Managers” which Bazan said he has officially renamed “Be Careful.” It was truly a ferocious set by a driven and focused band.

Pedro The Lion setlist from The Record Bar in Kansas City, MO on 2/9/18: