Coming Soon: Waxahatchee & Hurray For The Riff Raff live at The Blue Note in Columbia, MO 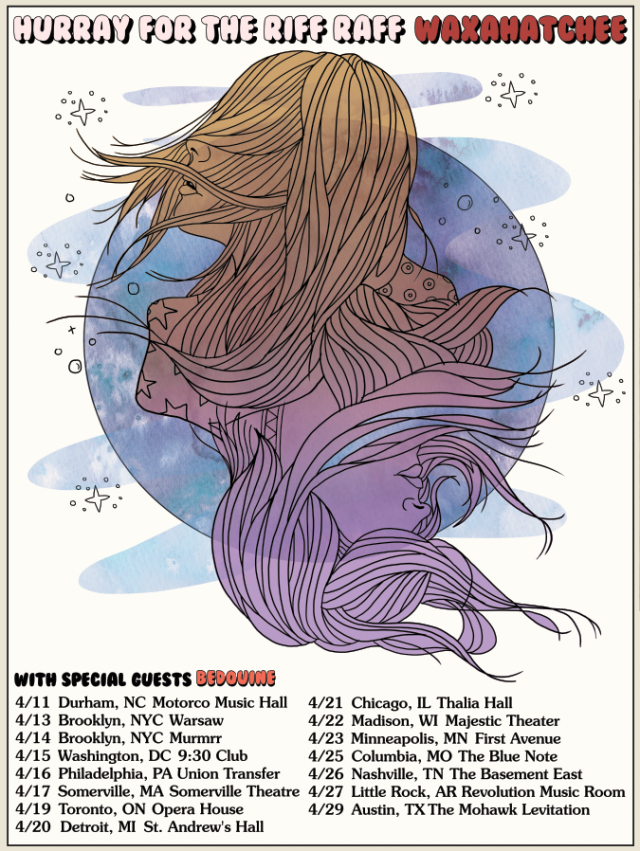 Katie Crutchfield is essentially Waxahatchee. Crutchfield has now released 4 albums under the moniker and has continued to gain momentum and popularity. The latest Waxahatchee album was released in July of 2017 to critical praise, cracking many critics top albums of 2017 lists and is called “Out in the Storm.” Crutchfield’s sound has continued to grow and morph into it’s current incarnation as a full band sound. This is evident on the lead single from the album “Sliver” that is a driving indie rock anthem. This wasn’t always the case though, the project started as a solo acoustic venture. That sound hasn’t been totally abandoned though, as shown on the new albums delicate closer “Fade.”

Waxahatchee sounds like: Neko Case, Liz Phair and that song on the radio you want to remember on your next trip to the record store.

Like Waxahatchee, Hurray For The Riff Raff is essentially a one woman show. Alynda Segarra is driving force here and her sound has also reached new peaks with her most recent effort. “The Navigator” was released in March of 2017 also to critical acclaim and also cracked several 2017 top album lists. The ambitious concept album is largely political on the back of the transparently aggressive “Rican Beach” and several other politically themed songs. Other songs like the Dylan-esque “Living In The City” show Segarra’s knack for spinning deep, meaningful lyrics and pairing them with memorable hooks to make for radio worthy tracks.

Hurray For The Riff Raff sounds like: Bob Dylan, Gillian Welch, the revolution starting in your back yard.

Also fitting the theme of the evening is Echo Park’s Bedouine. Another strong female voice leads this project with Azniv Korkejian from Syria steering the ship. Her soft voice accompanies dreamy instrumentation to create a perfect lead-in for the bands on this bill.

Bedouine sounds like: Mazzy Star, Iron and Wine and bedtime stories you never hear the end of.

You should RSVP on facebook to the event so you don’t forget and your friends know where you’ll be, here is the link: FACEBOOK EVENT PAGE