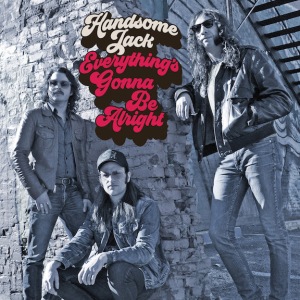 Ever miss the days of staring at your lava lamp while relaxing on some shag carpet? Well, Handsome Jack is here to help. You’ll find the three piece here channeling Muddy Waters and The Black Crows while putting together their blend of soulful southern rock.

On “Holding Off” some raspy vocals howl from the band while they drop into a Creedence style groove. Speaking of CCR, on “Keep On” there are some spot on John Fogerty vocal stylings while the band matches suit by channelling a swampy groove that will make you wonder what witch doctor they went to to get their sound. Back to more traditional bluesy stuff, the title track on “Everything’s Gonna Be Alright” has some straight up nasty blues licks reminiscent of what the Black Keys accomplished so well on their first few records. They still mix all of this with some glory days of FM radio classic arena rock centered around stompy guitar riffs. Their isn’t a ton new going on with this record but the band has found a way to hone in on a classic sound and make it their own. You won’t have to search far to find some Aerosmith sounding songs or a Howlin’ Wolf sound alike guitar lick but this is still a fun album and a smooth listen.