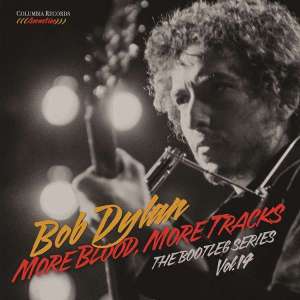 This 5 star album has been waiting to be released for decades. The often bootlegged “More Blood, More Tracks” or “Blood on the Tapes” or “New York Sessions” or whatever name it went by at the time has always been endlessly revered by Dylan fans and it’s official release is just further confirmation of its greatness.

Dylan is found here with a more stripped down version of his classic album “Blood On The Tracks.” This version of the songs is more cold and rigid, pushing the brutalness of the album to the surface. When it comes to the great songs possessed here you could easily argue the versions on this bootleg series are better than the original album tracks or vice-versa. For the mood of the album these version are without a doubt classic. The most important difference is the inclusion of one of Dylan’s best outtakes of his career, the sprawling and rambling “Up To Me.” The only disappointing thing is the packaging. The previous 13 bootleg series cds have been adorned with a slipcase and expansive booklet, this one is simply contained in a regular jewel case without any of the matching art from the other bootleg volumes.

The music is simply flawless here though, “Idiot Wind” is even more scathing and “Meet Me In The Morning” sounds even more rustic and bluesy. “Lily, Rosemary and the Jack of Hearts” is even more perplexing with the bare bones delivery too. This bootleg series is simply essential for any Dylan and most music fans in general.

Key Tracks: “Up To Me” “Idiot Wind” “Lily, Rosemary and the Jack of Hearts” “You’re A Big Girl Now”