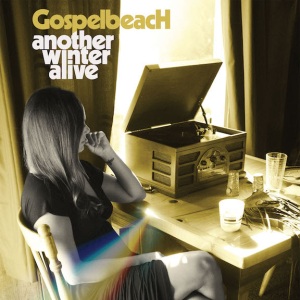 GospelbeacH has really tapped into the Laural Canyon vibes for their album “Another Winter Alive.” The folky psyche-pop approach fits right in line with bands like the Fleet Foxes where bands created soundscapes and concentrated on the mood of a song.

The record is cleanly produced and filled with good melody, for the studio side at least. The album is split between studio takes and live cuts right down the middle. The peak is on the studio tracks, at times you’ll think of alt-country leanings like The Jayhawks on songs like “Down South” and other times they harken back to 70s FM rock. It’s hard not to feel the 70s influence of bands like Badfinger and Nick Lowe when you’re listening to the ultimate roadtrip song “Runnin’ Blind” where the band spits lyrics like Tom Petty. The build to the chorus of “Dreamin'” is well constructed and the song really typifies the mood of this record. Sonically the live side of the record is a bit jarring like on “California Steamer” and the band really sounds like a Velvet Undergound disciple on “Out of My Mind.”

The live side stands as it’s own animal, not bad but very different from the flip side. When thought of as two different pieces of work it is easier to take in and they can become complimentary of one another but are never quite in sync.